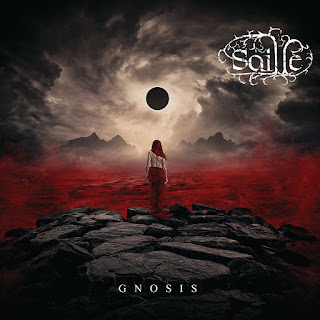 Continuing their mark into ever-more expansive realms, Belgium symphonic black metallers Saille have taken the mold of their former mastermind Dries Gaerdelen into utilizing these darker, more intense settings the way the band initially sounded on their earlier efforts. With Dries stepping down to focus on the bookings, the newly-christened five-piece version offers their fourth full-length effort March 13, 2017 on Code666 Records.

Despite the loss of a prominent figure, the band still retains a quite competent and effective showing of their trademarked brand of material. This is effectively bombastic symphonic-styled black metal, full of ravenous up-tempo tremolo-picked rhythms with plenty of explosive, over-the-top symphonics which generate those furious paces throughout here. The riffing is still pretty much the support here, offering that specifically polished, crimson-accented riff-work with the full-on outbursts of melodic harmonies scattered throughout here to make for an intriguing mixture of bombastic and symphonic when mixed with the keyboards. Taking on the grandiosity of their past efforts by layering tons of frantic tinkering and virtuoso tendencies to add to the blistering riffing and blasting drum-work throughout here, and with the album featuring this work for a vast majority of the time it’s expressive and dynamic offering. This does end up with the rather frustrating part of letting the album segue into itself way too frequently here, making for a hard time to tell where you are with all the songs pretty much blending into a veritable sea of keyboards and brimstone-accented guitars for a large portion of the time. It doesn’t become all that detrimental due to the intensity and energy featured throughout here, but it does lower it somewhat.

While it’s not a highly original offering with the repetitious nature of so many of the tracks rendering this one into a bit of a blur at times, there’s still a lot to really like with this one in terms of enjoyable material here which makes this an easy selection for fans of their past work or symphonic black metal in general.


Does it sound good? Order it from here:
https://saille.bandcamp.com/album/gnosis
Posted by slayrrr666 at 1:18 PM