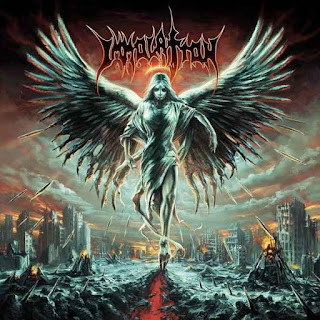 One of the genre’s biggest institutions, New York death metal legends Immolation have always had a defining and overwhelming influence on the scene with their dark, churning atmospheric take on the death metal scene that has earned them quite a deserved fan-base. Entering their third decade of active duty in any form, the groups’ tenth full-length effort was released February 24, 2017 on Nuclear Blast Records.

Coming through in fine fashion, the band wastes no time here displaying the prototypical dark and churning sound that’s typically associated with the band. Firing off that ever familiar sense of dark, blasting rhythms and churning, swampy riff-work that generate the kind of oppressive, heavy-handed atmosphere that the band is famous for, and when kept to a wide array of tempos and rhythm shifts the music comes off even more dynamic. That goes in conjunction with the atonal arrangements spread throughout here in adding another layer to the thick, murky atmosphere by changing up the tempo into more lethargic sprawling filled with these atypical squealing patterns that keep this one on such a varied offensive charge due to the ability of letting the thick, churning patterns generate another avenue of attack that keeps this one bristling with a plethora of dark and dingy rhythms. This attack is carried throughout here to such extremes that it’s entirety is taken up with this back-and-forth approach and the album maintains a viable engaging atmosphere due to this tactic. It really only makes this one feature one real flaw in that it’s still the same-old approach throughout here that the band has come to utilize, and there’s little new to be found in here that can’t be found in other efforts by them. That doesn’t make much of a difference for some, and it’s overwhelming power still holds this one up overall.

With such a large amount of positive work here and just so few flaws that many might not really care about, there’s quite a lot to like with the group who have released another stand-out offering that should greatly appeal to all fans of the bands’ past work and both death metal and old-school death in general.

Does it sound good? Order it from here:
http://www.nuclearblast.de/en/products/tontraeger/cd/cd-digi/immolation-atonement-mailorder-edition.html
Posted by slayrrr666 at 1:41 PM