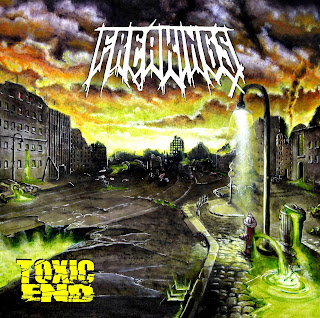 Continuing to charge forward in their quest, Swiss thrashers Freakings have spent their existence wallowing in the belief that their honoring of the old-school gods of the genre will give them the necessary strength to forge a new path for themselves. Now finally able to make their most comprehensive take on the style, the power-trio prepares it’s third full-length effort self-released March 6, 2017.

Channeling their old-school heroes, it’s patently obvious throughout this one that there’s a major focus on them homaging the works of the past efforts in the genre. That gives this one plenty of incendiary thrashing riff-work full of frenzied, chaotic rhythms in short bursts of speed that makes for a fiery showing of old-school thrash worship. With the majority of these efforts going through blazing full-throttle tempos that exploit these wild and charging rhythms, the effort comes off even more like the old-school scene with these being given such a suitable background to propel these fiery, frantic rhythms pummeling along to the utterly pounding drumming and scorching soloing. For the most part, that leaves this with a lot to really like even though it does highlight a minor issue with this one in that the album’s short, frenzied attack doesn’t do much for the album as a whole. The tracks oftentimes have a tendency to blend together into a blend of ravenous thrashing that’s all in the same general tempo which can make for a great time although it comes off way too familiar way too quickly as there’s no variation or let-up at all. Given the frenzied energy and utter competence on display, this goes a long way towards overcoming that issue but it’s still prominent enough to be noticeable.

With a lot of rather impressive thrashing on display and only a few minor quibbles that for the most part do hold it back some but are not altogether detrimental, this comes off rather nicely for fans of the bands’ past works or ardent revivalist thrash fanatics although those looking for more originality in their thrash should heed caution at best.