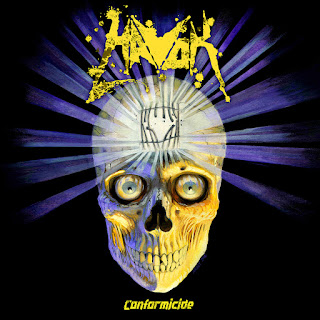 Trying to lead the charge for the genre, Colorado thrashers Havok have been at the forefront of the revivalist scene since their formation a decade ago as they set out to carry the ideals and intensity of their forefathers to the current trend of thrashers. With the addition of new bassist Nick Schendzielos to replace Mike Leon, the group springs forth it’s fourth full-length effort March 10, 2017 on new-label Century Media Records.

Much like their previous efforts, this one tends to dwell incredibly heavily in the realm of worshipping the old-school classics of the genre with a more modern touch. The riffing here is a direct touch on the original forms of the genre, from the raucous high-energy affairs that bring along the tight, rapid paces they follow through, and with the blistering rhythms carried along quite nicely. With these in fine array throughout here already, the album’s penchant for slowing down into a crushing mid-tempo style brings about a nice variety to really balance out the furious and intense blasters throughout here, and with the album as a whole carrying on between these distinct styles as it ranges from the furious, massive thrashers to the spindly, mid-range grooves there’s a nice degree of separation and distinction to the tracks that can be found here. That said, the album generally doesn’t come off as intense or sharp as it could when it’s not focused on the rousing thrash-work featured and staying more on those mid-tempo efforts here as they’re simply dry, mechanical and meandering far more than they really should be. It could be due to these making the album feeling more stretched out than it really should, but whenever the album isn’t bringing the speed and ferocity the song dips as a whole whether it’s the whole track or just a snippet. That is somewhat disappointing but considering the fact that it’s vicious far more often than not it’s not terribly crippling as is expected.

While it’s not as vicious and hard-hitting as expected due to the rather disappointing nature of it’s less ferocious material, the fact that the majority of the album tends to remain nicely on point in regards to its rather frantic energies makes this a solid choice for all revivalist thrash fanatics or fans of the previous work in general.