Sarkrista - Summoners of the Serpents Wrath 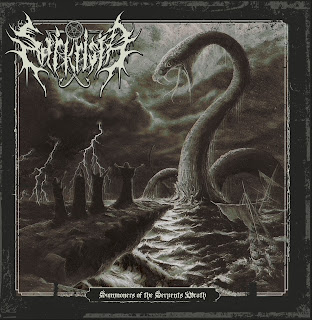 Attempting to further their sound, German black metallers Sarkrista have taken their old-school influences that were present on their previous releases and splits to an even further degree throughout here which keeps the band firing through quite prominently in here. Finally returning from a five-year gap between full-lengths, the groups’ true sophomore release was originally released March 6, 2017 on new label Purity Through Fire Records.

From the outset, the band has chosen to adopt a far more cosmic and dissonant approach to the genre than many of their homeland contemporaries, creating a wholly effective experience. This is due to the main driving factor throughout here being nimbly tremolo-picked rhythms that offer massive, sprawling patterns in a wholly straightforward manner throughout here, rumbling along at blistering paces for the majority of the tracks. This full-on sprint makes itself known with the album rarely deviating from this pronounced format with the simplified riffing furthering the buzzing tremolo patterns for the tracks, and with the blasting drum-work and thunderous rhythm-section following suit the album carries quite an impressive streak. Once it breaks away from this style, there’s a little less to like with the bland tempos featured throughout here making it all the more obvious how one-dimensional the music really is which is the album’s singular detrimental flaw. The album is awash in intense, swirling tremolo patterns that are played are quite prominent gallops for the most part, and it never deviates into any form of enhanced technical aspects or rhythm changes which just makes the songs flow into each other quite easily. With only the minor of changes to differentiate each track from the others, it’s a huge blend of fiery, up-tempo tracks that just start sounding the same as the deeper it gets into the album, and with the second half featuring some rather extended numbers this is magnified even more so.

Although there’s still quite a lot to like here with this release in terms of fiery, engaging old-school black metal, the sameness of the delivery might be enough for some to get over that it really becomes worthwhile only to the most devout and hardcore followers of the Finnish wave of black metal or old-school aficionados in general.

Does it sound good? Order it from here:
https://sarkrista.bandcamp.com/releases
Posted by slayrrr666 at 1:27 PM