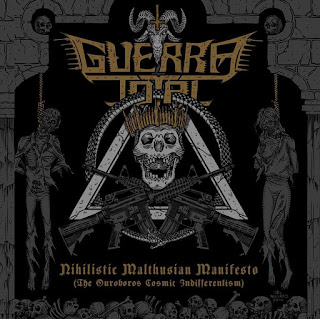 Still going strong after all these years, Colombian black/death/thrashers Guerra Total have offered plenty of traditional South American brutality including their style changeover on this album that settles into a less chaotic, more death metal-oriented take on their blackened thrash beginnings. Celebrating their twentieth anniversary in existence, the groups’ sixth full-length effort was released February 17, 2017 on Iron, Blood and Death Corporation.

Although the group does slightly shift their style, it’s hard to ignore the fact that their original sound is still very much evident throughout here. The riffing throughout here is the same utterly frantic, blistering volley of brimstone-soaked tremolo rhythms that offer forth a rather chaotic soundscape here as they’re quite adept at forging through blistering thrash tempos. The tight, furious speeds they’re played at allows this one to be utterly ferocious and dominating as it thrashes along to the razor-wire patterns in the majority of the tracks here, and once it carries these into that typically raw, blackened atmosphere in here this one gets even better with the raucous production style offering the chance for scores of sterling screaming leads and pounding rhythms to accent the blitzkrieg-style thrashing as well as serve as a base for the incorporation of the newfound death metal rhythm section throughout here. Despite the riffing being of a stellar series of thrashing madness, it still carries with it a deep, churning rhythm section that offers up plenty of depth and charging atmospheres to the music that provides a stronger, more dynamic offering throughout here. The fact that the album does tend to bleed together as the songs come off the same is still an issue within the music, and the strange influx of keyboards and theremins are quite odd, but overall this is still a pulsing, pounding offering.

Despite a few questionable elements and a rather tough-to-decipher tracklist, this is still full of the bands’ typically charging, explosive blackened thrash stylings which manages to make this one an easy choice for fans of their previous work or this frantic style in general.


Does it sound good? Order it from here:
https://ironbloodanddeath.bandcamp.com/album/nihilistic-malthusian-manifesto-the-ouroboros-cosmic-indifferentism
Posted by slayrrr666 at 12:27 PM