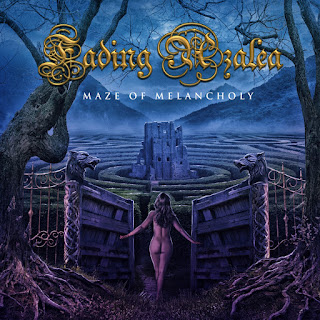 Formed in 2013, Swedish melodic metallers Fading Azalea have set out to merge their hometown of Gothenburg’s famous style of pounding melodic fury alongside plenty of fiery rhythms that made the city renown to begin with over two decades earlier. Overcoming a host of lineup issues that has brought them down to a duo, their self-released debut effort was originally released March 1, 2017.

Attempting to impress immediately, the group manages to get a lot accomplished with their manner of strong symphonics and blazing melodies throughout. The predisposition to using the keyboard-based symphonics is the driving force here, utilizing the bombastic atmosphere and grandiose rhythms to give this one a great base for the rather striking melodic riff-work. These tend to work together rather nicely, going from the gothic-influenced sprawling melodies with full-on keyboards blaring alongside the tighter, more power metal-influenced rhythms that give this one a greater sense of variety here. That comes across rather well with the occasional dips into the frantic, blistering attacks throughout here with the frantic drumming and over-the-top symphonics of the keyboards matching the fiery and frantic rhythms utilized here and making for quite the nice amount of dynamics in the music here. While that does make for a solid time overall here, there’s still one big detrimental issue throughout here in that the softer, more mid-tempo arrangements here aren’t all that impressive, ranging from the light middling riff-work to simply letting lilting piano notes accompany operatic crooning which sounds impressive but leaves a sour taste for those wishing the rest of the music is as good as their up-tempo work. As well, the fact that the album is quite bloated and overlong with a few too many tracks, especially for a debut offering, makes it somewhat of a slough to get through and makes this one feel longer than it really should, although it’s still quite enjoyable overall with the caveat of this being a debut.

With plenty of solid Gothic-styled influences and an overall enjoyable symphonic atmosphere carrying this one along quite nicely, this one has some rather fun positives to overcome a few minor flaws and makes this a nice choice for those into melody-driven symphonic metal or female-fronted metal in general.


Does it sound good? Order it from here:
https://www.cdbaby.com/cd/fadingazalea
Posted by slayrrr666 at 7:08 AM