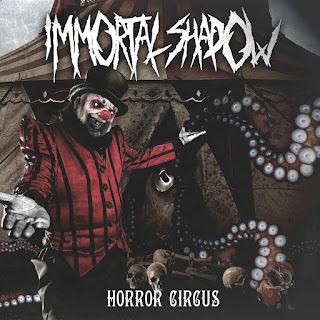 Formed back in 2006, Spanish melodic death metallers Immortal Shadow initially came together with the sole aim of playing metal with friends which has brought out a combination of the hard and heavy riffs with the melody of twin guitars that intertwined into the old style. Finally getting to their first release, the groups’ full-length debut was originally self-released January 23, 2017.

Once this gets going, there’s a rather pronounced and explosive melodic air throughout here that’s quite heavily accented in the music. This comes from the rather rabid twin-guitar riffing that propels the tracks throughout here, giving this one plenty of rather tight and condensed thrashing patterns that offer plenty to like here due to the speed-driven rhythms and pacing present. That brings out the melodic flurries incredibly well while letting the frothing intensity get worked up strongly to a much more frantic setting than expected with the riff-work getting into much deeper and blistering settings during the mid-tempo sections.being graced with a melodic accent during these frantic sections gives this the kind of balance due to these sweeping melodic accents over frantic, charging patterns. Given that this comes off with a lot more energetic punch than expected, the album does make a strong initial impression even with the fact that there’s a slight issue to be had with the albums’ condensed and shorter feeling. The tracks here are quite short overall, all being pretty much straight-up three minutes long and don’t offer up too many chances to really explore the genre all that well. It gets caught up in the brevity issue more than anything else here which would enhance the melody a lot more had the arrangements been able to breathe more than what’s on offer. It’s not that detrimental, though, and really doesn’t let a lot of the fun get diminished.

An incredibly fun debut offering, this one really offers a lot more than expected and gets some really engaging work in here and although it does have a few minor issues on display the fact that there’s more to like about it makes this a solid choice to explore for fans of intensity-driven melodeath or the genre in general.


Does it sound good? Order it from here:
https://immortalshadow.bandcamp.com/
Posted by slayrrr666 at 1:04 PM