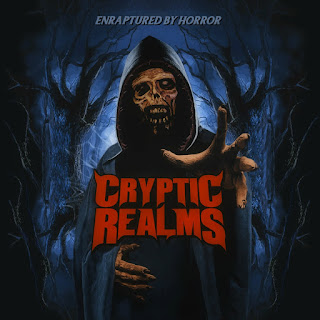 Formed just in 2015, international death metal supergroup Cryptic Realms wasted no time in paying homage to the classics of the genre with their first release coming quite early on in their history leading to a crushing split release that pushed the band further. Now finally able to offer their first proper release, the bands’ full-length debut was originally released November 28, 2016 in a co-release between Death in Fire Records and Iron, Blood and Death Corps.

As befits their chosen sound, the group is quite clearly adept at their old-school mannerisms with all manner of devices throughout here to showcase this style. This is filled with efforts that showcase plenty of tight, deep churning riffing that carries plenty of variations between their pacing as the album’s straightforward nature makes for a somewhat one-note approach. Essentially being there just to showcase the swirling riff-work in various approaches, the album descends into simplistic, rather light chugging that carries the churning riff-work through these simplistic patterns with very little deviation, being played as nothing more throughout here at all as the whole album is so strictly by-the-numbers in here makes for a really dull time. It really leans into that camp so often with its rhythms and approaches that it feels too caught up in itself too easily and manages to really lose itself quite easily here as it’s quite hard to tell tracks apart from each other. Being caught in too simplistic patterns and rhythms makes it hard to figure out what’s happening, and it does take awhile to get over this and get on with the rest of the album.

Being way too simplistic and rather one-note for its own good, this is lowered somewhat from the relatively crowded retro death metal scene due to that even though it does have enough positive elements about it to be worth a look for those who are fans of the members’ other acts or non-discerning revivalist aficionados.


Does it sound good? Order it from here:
https://ironbloodanddeath.bandcamp.com/album/enraptured-by-horror
Posted by slayrrr666 at 12:28 PM