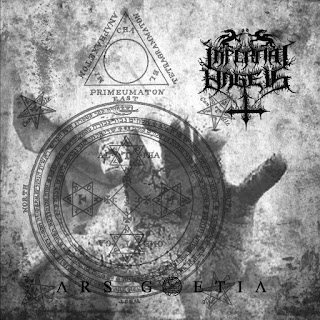 Continuing to usher their own devastating sound, Italian melodic black metallers Infernal Angels feature plenty of glimpses of pure aggression that are blended into parts of mournful, disturbing sonic extremity with sudden melodic grafts throughout here. Featuring several great guests on the album, the groups’ fourth overall full-length was released January 20th, 2017 on My Kingdom Music.

Once this one gets going, there’s plenty of fiery and ferocious music throughout here that continues to showcase the band at the top of their game. The album is based mostly on tight, ferocious tremolo riffing that produces a strong, thunderous base for the rest of the music to offer the frantic tempos and patterns featured throughout here. Generating plenty of intensity with the blistering drumming while remaining firmly aware of the tight, frantic buzzing melodies blazing alongside the raging music featured here, and overall there’s a solid amount of work displayed here that makes for a wholly enjoyable time. The one main problem with this one arrives in the fact that there’s just not a whole lot of deviation in the music which has a ton of opportunities to express any kind of variance here yet it doesn’t really offer that here. It’s all pretty much the same general buzzing tremolo melodies and rather tight, same-sounding rhythms for the most part, and that does tend to lower the impact of the album when it’s almost impossible to figure out where on the album you are. However, this isn’t that detrimental as there’s still a lot to like here.

While there’s plenty to like here with this one getting some rather enjoyable melodies alongside the striking black metal elements here, the minor flaws do lower this one somewhat slightly so that it appeals really only for those who enjoy this brand of melodic black metal or fans of the bands’ previous work.


Does it sound good? Order it from here:
https://infernalangels.bandcamp.com/album/ars-goetia
Posted by slayrrr666 at 11:23 AM