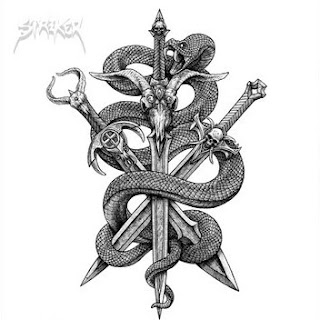 Still flying the banner of the old-school, the Canadian heavy/power metallers Striker have adopted a slight change of pace in their sound as the band has gone a more streamlined, straightforward burst of their trademarked old-school sound. With a quick turn around to their new release nearly a calendar year from the last effort, the groups’ self-titled fifth full-length is released February 24, 2017 on their own Record Breaking Records.

Despite the slight sonic shift present, it’s still obvious the band is intent on going through their stellar old-school style here which remains prominent throughout this one. No longer featuring wild, lengthy rhythms or expanded instrumental sections as instead they go for a simple series of charging riff-work and straightforward patterns that go more for solid beat-downs than anything else throughout here. The same high-energy attack is still there, making for a much more energetic and engaging time here with the album simplifying matters without offering up much of a change in their formula bringing this one along quite nicely. It does offer a few minor stumbling blocks in places here where it slips in lighter rhythms and melodies from their power metal style that makes for quite a striking contrast against the raging traditional metal elements elsewhere throughout here, and it seems as though these were just the odd misshapen rhythms due to the rather strong manner they accomplished this work in the past so to suddenly see it lowered in this manner could very well be a minor fluke of the album. Still, it’s a noticeable flaw here and does bring this one down somewhat slightly even with so much else to like throughout here.

While featuring a few minor missteps here with the lighter melodies not generating the kind of enjoyment as their heavier tendencies, this one still packs in more than enough to like here with the streamlined style working more often than not and making for a nice addition to any fan of their past work or revivalist heavy metal acts.