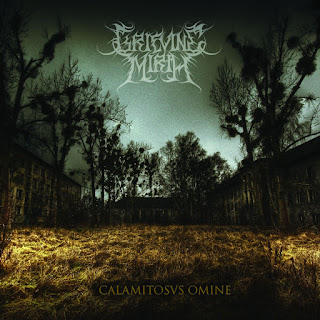 Coming together in 2011, international post-black metal supergroup Grieving Mirth have brought their collective members’ experience together into a rather solid and enjoyable output of melodic and dreary atmospheric-tinged black metal. With the original recording done several years before vocals were utilized, the groups’ first EP was originally self-released March 18, 2015 before a re-release July 1, 2015 on Loud Rage Music.

By adopting this style of post-metal, the album comes off rather familiar and rudimentary quite easily here as it offers very few deviations for the style. For the most part, it’s basically a series of swirling tremolo riffing in a galloping mid-tempo push that gives this a style similar to a vast majority of the genre as it’s often paired with long-winded sections featuring the same buzzing tremolo riff repeating for some warm, rich melodies. While it’s paired nicely alongside blasting drumming and bombastic, epic keyboards for a generally massive sound throughout here, the simple fact that there’s not a whole lot else to really glean from this one does seem to hold it back somewhat as there’s only so much deviation done in these few tracks and it serves as effective and enjoyable if one-dimensional due to that. The chance to offer more tracks would push for some more deviation throughout here, but otherwise there’s not a whole lot else to find within this one.

Though there’s nothing that overtly wrong with what’s on display here, the fact that there’s room for more to work with in regards to their sound makes for quite an appealing effort only for the most devout atmospheric black metal aficionados or fans of the members’ other projects.


Does it sound good? Order it from here:
https://loudragemusic.bandcamp.com/album/grieving-mirth-calamitosvs-omine
Posted by slayrrr666 at 11:13 AM