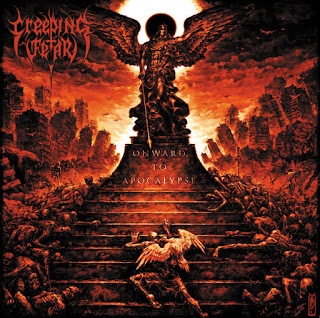 Created in late 2011, French death metallers Creeping Fear have spent their time honing their skill-set with a series live dates and well-received demos that have set the group on the path to the present day as they’re finally able to put the finishing touches on their debut effort. With their work finally able to be exposed to the public, their full-length debut was released March 3, 2017 on Dolorem Records.

From the onset, this one offers plenty of utterly enjoyable elements that come about due to the bands’ rather strong and charging atmosphere. The album is fueled by strong, raging riffing that takes a ravenous, buzzsaw-style of riffing to the forefront while adding together a frantic beat to the proceedings, all of which adds together into a rather pummeling onslaught of more modern templates in the genre. When these are added together alongside more loose chugging rhythms and swirling riff-work rather than the tighter buzzsaw rhythms elsewhere throughout here, that brings for a crunchy variant to the faster efforts throughout here, letting this get some nice disparate elements into their sound. The problem is these are the bands’ more epic and overlong arrangements due to the slow chugging style in the riff-work, and these are on the whole far blander than they need to be since the band has plenty to like on the more plentiful faster tracks here so even with the more enjoyable tracks taking up a majority of the album these long-winded efforts aren’t that exciting on the whole. Still, this is a debut and that doesn’t strike as big a detriment as it really deserves to be since most everything else on the record comes off enjoyable enough to overlook this.

Despite having some problems with maintaining some interest in their longer efforts here with some overlong tracks, there’s plenty to like elsewhere here with the bands’ faster and frantic material that it should be appealing to those who prefer this style of thick, crunchy death metal and can overlook the few flaws here.


Does it sound good? Order it from here:
https://doloremrecords.bandcamp.com/album/onward-to-apocalypse-album
Posted by slayrrr666 at 1:32 PM