Rebel Souls - The Forces of Darkness 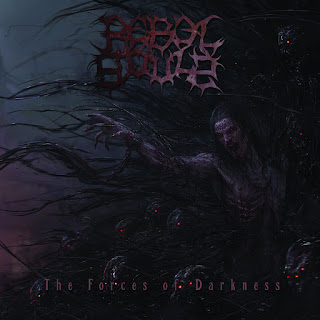 Formed back in the year 2000, German death/black metallers Rebel Souls initially never made it past the demo stage before splitting up, only to reform under a reenergized lineup a full decade later which has re-recorded most of their first demo for their newest release. Finally getting their full-length debut released, the effort was originally released February 24, 2017 on Art Gates Records.

For the most part, this is an exceptionally enjoyable outburst of quite a decent mixture between black and death metal that comes off rather nicely. Featuring plenty of churning riff-work and a rather strong, dynamic crunch that gives this one a pretty ferocious assault, the main attack featured here is given a strong enough base to work alongside the rumbling rhythms at play. This makes for a crushingly modern style of the genre which is then aided by the album’s twisting haze of rhythms that gives this a slight blackening of their riff-work, refreshingly opting for this approach rather than tremolo riffing to create that particular atmosphere. This clunky set of patterns comes off rather nicely overall here with the tight running time enabling the album to run by incredibly quickly, which is perhaps its’ one minor failing as there’s the feeling that this one really could’ve used an extra track or two to help round out the running time here as the compact manner of the album makes this one go by so quickly that it needs the six-minute epic to bring this even close to a half-hour album and it leaves the listener wanting more tunes more than anything. It’s the only thing really wrong here, and that’s not even that much of an issue at all compared to the enjoyment elsewhere throughout here.

While there’s a lot to like here overall, the fact that it’s over too quickly does hold this one up slightly so that it does feel too brief with all the quick, compact rhythms does manage to hold this back enough that this one is really recommended to fans of modern death and black metal.


Does it sound good? Order it from here:
http://www.artgatesrecords.com/store/index.php?id_product=49&controller=product&id_lang=5
Posted by slayrrr666 at 12:43 PM