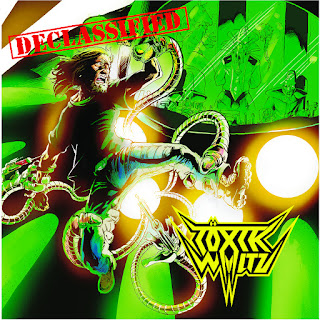 Formed back in 2009, Spanish thrashers Töxik Waltz came together as Madhouse before adopting their current moniker following a slew of lineup changes that signified the bands’ current direction to deliver the most old-school sounding thrash in the scene. Finally able to expand beyond the boundaries of their home country, the groups’ debut full-length was initially released September 10, 2016 on Eventhink Metal Records.

Harboring the love for their old-school style, the group is clearly and obviously intent on exploring that style throughout here which makes for a rather impressive time. Focusing on tight, crunchy riff-work and a generous mid-tempo pacing for this series of patterns, there’s a wholly enjoyable series of rhythms throughout here due to the album generating this impressive style of old-school flavored attack. It’s pretty simplistic overall and really only generates any kind of special energy with the selected addition of fiery, frantic riffing that adds a much-needed sense of energy into the otherwise one-note rhythms elsewhere throughout the album which is what tends to be it’s lone minor downfall. The album contains plenty of tight, crunchy patterns and certainly competent performances, but otherwise, there’s not a whole lot else throughout here to get as worked up about considering the lack of variety in the overall presentation as the album tends to focus on the mid-tempo almost exclusively. This can make the album somewhat repetitive as it carries along, especially with all the tracks pretty much the exact same length of time overall, so this one gets a great attack that’s carried to excessive lengths of repetition here with the same riffing, and while this can be overlooked due not only to the enjoyment carried out here by the competence of their attack as well as this being a debut offering, it does lower this one slightly.

Although it does need a little extra variety and a series of different rhythms to help distinguish them from the pack, this is still an incredibly solid and enjoyable burst of old-school influenced mid-paced thrash that works well enough for devout followers of that style or those that enjoy the more mid-paced side of the genre.


Does it sound good? Order it from here:
https://toxikwaltz.bandcamp.com/album/declassified
Posted by slayrrr666 at 11:06 AM