Warbringer - Woe to the Vanquished 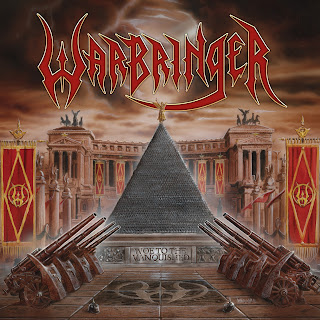 Continuing to evolve through the years, reactivated Los Angeles thrashers Warbringer have continued to utilize their continued expansion of progressive elements into their trademark sound to further their stance as one of the revival thrash scenes leaders. Now coming back to active duty following their previous lineup implosion, the groups’ fifth full-length effort was released March 31, 2017 on Napalm Records.

Taking the charge right from the beginning, it’s obvious that the break didn’t change their initial standings as the music still screams their classic vibe. For the most part, this features tight, ferocious riff-work and blistering paces that fully retain the chaotic vibe of the bands’ early material which is a prominent feature throughout here. Diving and buzzing through the various series of ravenous tempo changes featured here makes for an utterly blistering and pummeling experience, with the ferocious patterns coming from all sides and never relenting in their mission statement offering up this fiery brand of thrash. The only breaks from the all-out assault here come from the decision to drop the ravenous tempos in favor of more relaxed melodic chugging and extravagant leads that serve their heavy-handed rhythms and bombast quite nicely, giving this one an incredibly effective series of breathers that serve not only the full-throttle section of the album but gives this a rather sharp contrast to make for an even more effective work here. The brevity of the album as a whole might be something to get over, as it requires the ten-plus minute epic simply to reach a prominent length could be an issue, yet that’s really nitpicking this one and it’s quite an effective effort overall.

Full of raging, intense thrash and plenty of solid songs, there’s plenty to like and even something to love about this release which brings their legacy back to the forefront as one of the pioneers of the genre and makes for a no-doubt interest for those that liked their past work or any revivalist thrash fan as well.

Does it sound good? Order it from here:
http://www.napalmrecordsamerica.com/store/sound/cd-s/warbringer-woe-to-the-vanquished-cd.html
Posted by slayrrr666 at 11:25 AM