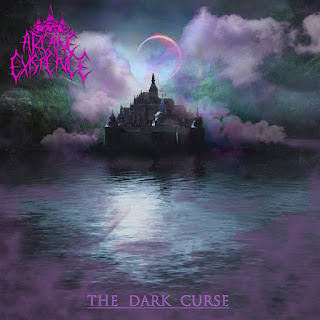 Formed just in 2016, California-based melodic black/death metallers Arcane Existence have been taking their influences and running it through the deep lows and emotional highs as they adapt a storyline involving the TV show ‘Once Upon a Time.’ As the three-piece offering version of the band continues to expand and grow, the groups’ full-length debut was self-released January 6, 2017.

From the beginning, the group displays a rather adept and profound mixture of stylish symphonic elements within the melodic black/death realm. The fiery tremolo riffing is generally tight and up-tempo, raging along with a galloping pace which generates a rather fun and frantic charge here while engaging the blistering symphonics here. That is far more impactful throughout the album, going for grandiose elements that are far more dynamic than the majority of the riff-work featured here not only in terms of featuring the melodic flurries but also focusing on the massive orchestral sounds when placed alongside these engaging tremolo patterns. With the symphonics blaring along, it ends up gaining more steam along the way with the harmonies female vocals which help to greatly offset the vicious growling and deeper rhythms here and adding yet another solid melodic showcase for the band which makes for a wholly enjoyable offering overall. It does run into some minor problems here where it seems to really drop the intensity level of the arrangements around the female vocals which tend to approach Gothic style arrangements that are wholly underwhelming and take the sting out of the attack considerably as they don’t really sound close to the previous blackened arrangements. It’s something that can be ironed out over time, and being a debut this isn’t something to hold over them anyway.

Despite a few minor issues here and there that don’t really settle themselves quite easily, the fact that the over-the-top symphonic elements and melodic harmonies work so well alongside the fiery up-tempo work throughout here makes for a solid choice for fans of this kind of style or those into the melodic black/death metal style.


Does it sound good? Order it from here:
https://arcaneexistence.bandcamp.com/
Posted by slayrrr666 at 11:01 AM