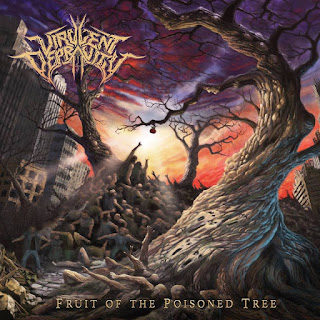 Formed just in 2015, Tennessee-based technical death metal newcomers Virulent Depravity have sought to bring their seasoned experience and whirlwind technical prowess that makes for such a devastating turn in the genre already saturated with efforts. Loaded with a stellar group of guest musicians to round out their impressive sound, the power-trio prepares its full-length debut April 7, 2017 on The Artisan Era.

Bringing their true intentions out early on, this here is a rather strong and blistering account of their style which makes for a truly dynamic and charging offering. This is mainly due to building a strong base of technically-challenging guitar-work full of ferocious speed-drenched patterns shifting effortlessly from thrashing progressive chords to dive-bombing rhythms and jangly lead-work that all produce a veritable soundscape fully capable of utilizing these strong rhythms. It’s all balanced out by the addition of furious blastbeats and highly technical drumming alongside spindly bass-lines to provide a finely-tuned, frantic blast of challenging material at complex speeds which generates this likably intense nature for the vast majority of the tracks. With all that already high-end material featured here, there’s room for more fun in the more epic tracks to engage in far more varied and unique approaches, from long-winded introspective intros to more relaxed tempos in order to offset a more melodic tone with more pronounced and obvious down-tempo sections to allow for swirling, sprawling leads and far more adventurous patterns that truly offer a more fleshed-out sound than the relentless blasting. They do, however, bring out the only real flaw in the album with its overlong and somewhat bloated second-half which seems to drag with these monsters all placed there to really beef up the record just before closing which has the distinction of making it seem to take forever to play through on its own. It’s not enough to derail the rest of the music but it is a somewhat disappointing effort considering how good it worked beforehand.

While it doesn’t really seem to need to be as long and bloated as it feels, the fact that the vast majority of the music otherwise manages to feature plenty of overwhelmingly enjoyable elements does lift this one up enough to give this a lot of appeal for any fan of technical death metal or fans of the individuals’ other bands.

Does it sound good? Order it from here:
https://virulentdepravity.bandcamp.com/releases
Posted by slayrrr666 at 11:15 AM