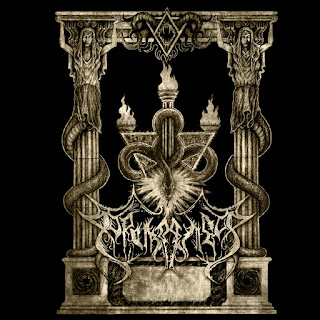 Long-time members of the scene, Greek black metallers under the name Prometheus have suffered plenty of issues in their decade-plus holdover from their demo days as a terrible motorcycle accident with the band members halted their progress considerably. Now finally at the strength required for their first release, the bands’ full-length debut was released April 28, 2017 on Katoptron IX Records.

Starting out on a strong note, the band decides to offer up a rather impressive style of influences to make for a rather rousing and enjoyable affair. Generally the attack falls into the second-wave worship of Norwegian style old-school black metal, featuring a full assortment of tremolo riff-work and fiery brimstone-soaked rhythms that retain the general hallmarks of the scene. This is fast, fiery and utterly frantic patterns that make for a rather explosive outing here generating some rather fun times, going from the blistering tremolo-styled frantic blasting to a more controlled mid-tempo series of rhythms that offers a great deal of variety in the music throughout here while giving these parts a special charge with the inclusion of a churning rhythm section courtesy of more death metal influences. The deep, rumbling grooves and stylistic drumming that gets carried out here makes for a wholly more vicious attack alongside the thrilling traditional black metal attacks. Given that the majority of the album focuses on this style of attack which produces these rather epic arrangements, there’s not a whole lot to dislike here as the album plays it straight for the most part, and it really only comes off with a few minor strikes here with the frequent low-tempo sections that plod along rather lamely more than anything, but this isn’t enough to really deter the album for the most part.

Given plenty of room to work through some rather impressive features here, this one manages to come across rather well without too many flaws overall and barely detrimental ones at that which makes this one a wholly worthwhile choice for fans of the second wave of Norwegian black metal.


Does it sound good? Order it from here: