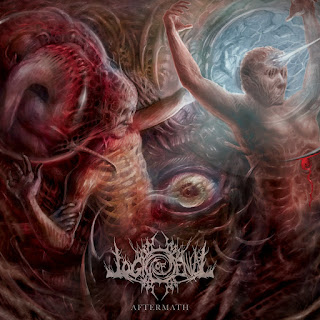 Continuing to bring out their sound, Italian brutal death metallers Logic of Denial have given their relentless and unyielding brand of technically-complex brutal death metal further room to breathe with a three-part concept album based on the struggles of grief. With a four-year gap between releases that sees the addition of new guitarist Marco to the group, their third full-length was originally released June 9, 2017 on Comatose Music.

As has been the case for the band, this one offers up rather frantic and truly blistering styles of technically-challenging material for the duration here. There’s a strong predilection for tight, choppy rhythms and challenging start/stop patterns that are truly massive-sounding throughout here as the spurts of blasting energy coming off this approach makes for a rather engaging time. The fact that the material is as tight, frantic and utterly challenging as it is makes these rhythms all the more dynamic, impressive and brutal. Given that this is the vast majority of the album, there are tons of positive elements strewn throughout here for this type of attack as the barbaric speed and blistering rhythms on display give this one a great showcase for those general attributes. The main thing holding this one back is the fact that there’s just not a good reason for this one to include all the different thirty-second introductions to the tracks here separating all the different sections of the music. The fact that they’re all just short snippets, sometimes not even containing any kind of actual music as they feature movie samples or just incessant droning with the occasional blast to signify the change into the next track do nothing for this one but stifle the momentum somewhat, keeping this one to an odd pattern of several great tracks and then a screeching halt with the interstitial effort slowing it down. Otherwise, there’s not much else to dislike here.

Featuring plenty of ravenous and blistering material that has plenty to really enjoy overall here, the minor issues with the stumbling pace due to the interstitial efforts don’t hold this one back enough to not be of interest to fans of their past work or challenging brutal death metal in general.

Does it sound good? Order it from here:
https://comatosemusic.bandcamp.com/album/aftermath
Posted by slayrrr666 at 3:23 PM