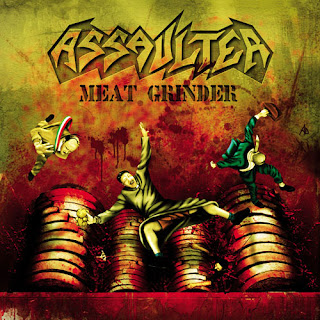 Formed in late 2007, the Italian speed/thrashers named Assaulter have quietly set out to bring forth their odes to old-school speed and thrash metal as a slew of lineup issues initially kept their first release until 2012 when the band had become faster and much more technical. Now finally at the time to unleash their first professional release, the bands’ full-length debut was released April 12, 2017 on EBM Records.

Bringing the fire and fury from their early work, there’s plenty of rather strong and impressive work throughout here which makes for a fine start. The basic style here of utilizing the speed metal riff-work, firing off the tight and thunderous riffing which really amps up the intensity of these speed metal riffs. There’s a strong and dynamic attack here that makes for a rather enjoyable approach here with the fiery riff-work zipping along at those far more vicious and frantic patterns that makes for a far more engaging time here with the thrilling old-school thrash rhythms still on-track here keeping this one with a rumbling, heavy backbone to the speed-metal lashings and furthers this one quite nicely. While the basic experience here is quite enjoyable and makes for a really solid starting point, the fact that there’s a minor flaw here makes for a somewhat lesser experience where the album goes into way too many half-a-minute instrumental interludes that interrupts the flow of the release a little too much to really take the main intensity out of the album. Rather, this one feels like they could’ve been more as proper song intros rather than separate tracks, and it stifles the album somewhat, but even with this there’s not a whole lot really wrong elsewhere here.

Coming along rather nicely here with plenty of really enjoyable and frantic speed metal assaults laced with solid thrash metal leanings, a few minor shake-ups in the running order does hold it down slightly enough here for this one to really be of interest for those looking for speed metal or solid old-school thrash.


Does it sound good? Order it from here:
https://ebmrecords.bandcamp.com/album/meat-grinder-2
Posted by slayrrr666 at 3:59 PM