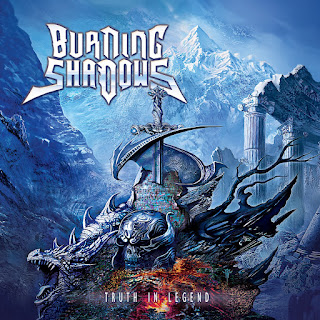 Continuing to branch out in their career, Maryland heavy/power metallers Burning Shadows have continued to utilize their tried and tested brand of explosive old-school rhythms with plenty of impressive lyrical efforts recounting their previously-established love of history. Taking a more singular approach away from the concept album of their last effort, their independently-released third album was released May 5, 2017.

Stylistically, the album as a whole carries pretty much a lot of the same elements that made their previous works so much fun with a rousing and vigorous attack. Based primarily around the stellar riff-work, the general approach here contains plenty of tight, crunchy patterns that march along at a steady mid-tempo charge that follows a more traditional metal march. Alongside this typically fine crunch, the main element at play here is the fine melodic rhythms that are at the forefront of so many tracks here, giving this one the kind of light, airy atmosphere which carries the tracks at a fine melodic buzz with the tight, crunchy riffing plodding along here. This is greatly enhanced even more with the album’s faster, more fiery efforts which lets the crunchy trad metal stylings take a more active stance in the rhythms and forces along plenty of great work throughout here with these fine elements bringing about a solid variety that gives this balance and dynamics that keep things interesting. About the only thing that can really hurt an approach like this happens to pop up which is an overly-long and needlessly complex epic that derails the momentum, contains way too many segments to be needed and overall comes off as a draining experience to end the album on, and that’s what happens here as the last epic really feels it’s length and seems endless throughout here, making this end on a somewhat sour note. Otherwise, there’s plenty to like here.

While it does get held up somewhat slightly by the excessive and overly ambitious epic at the end which is a pain to get through, overall there’s plenty of enjoyable enough work here that this one becomes quite a promising effort for those that like their power metal with a heavy crunch or trad-metal fans who can appreciate power metal melodies.


Does it sound good? Order it from here:
https://burningshadows.bandcamp.com/album/truth-in-legend
Posted by slayrrr666 at 10:32 AM