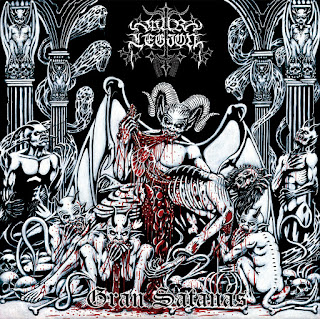 Formed just in 2015, Colombian black metal power-trio War Legion wasted little time in bringing forth a brand of filth and old-school grime into the crowded scene as the band quickly brought forth a rather impressive style of attack. Quickly unleashing their ravenous assault on audiences, the groups’ self-released full-length debut was originally released November 12, 2016.

Bringing forth the ravenous old-school charm, the group manages to elicit plenty of filth and fury in their overall sound and presentation. Bolstered by that relentless style of tremolo riff-work prevalent in the scene, this bounces along through the somewhat sloppy yet still engaging attempts at frantic rhythms. Given that the sloppiness of the material is still present here, it simply adds to the ferocity and intensity as the riffing adopts a straightforward nature filled with plenty of tight, blistering riffing that adds an incredible fiery energy to the tracks when aided by the relentless pounding of the drumming throughout here. While this tends to be the case for the most part here, the fact that this one does seem incredibly short with the album’s running time and tracklisting making it seem like a demo or an EP effort rather than a full-length. This is certainly a case where it could’ve used more on here to build it up a little better since the attack is quite nice if formulaic of so many of the other genre entities which lowers this a little more as well. Still, this one has a lot to like overall.

While it does have a slight problem with the tracklisting keeping this one down somewhat, there’s still plenty of enjoyable elements to this one with their old-school ferocity that helps to raise this one up enough to be quite worthwhile for fans of extreme South American black metal or old-school black metal in general.


Does it sound good? Order it from here:
https://warlegion.bandcamp.com/releases
Posted by slayrrr666 at 12:46 PM