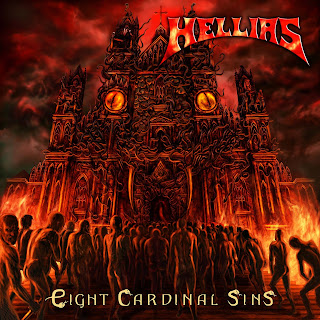 Ever since their reformation, Polish thrash legends Hellias have continued to bring their rousing brand of Eastern European-styled take on the Bay Area formula of thrash that originally brought them out of the underground back in the late 80s. Still fighting hard after the eight-year gap between releases, the groups’ fifth full-length overall was originally released February 10, 2017 on Thrashing Madness Productions.

Forged through their decades of work, the album here clearly and dominantly showcases their love and enjoyment of the Old-School style of thrash. This means the album is full of tight, slightly technical riffing featuring a generally steady mid-tempo crunch that makes for a much more pronounced charge than expected here, with the fine ability to shift into a heavy-handed groove-style series of rhythms to add that extra boost to the proceedings also thrown in as well. That keeps the album with a nice violent streak in terms of intensity as well, as the swirling patterns add a thoroughly rewarding punch to the classic riff-work featured in here. While on the whole this approach gives it a fine and enjoyable approach, this does create the issue of the album going through the lower-intensity efforts when it’s not firing away on the thrash as the more groove-inspired rhythms here do give this one a slightly more restrained feel which gives this a much greater discrepancy in tone than expected. The fiery and energetic riffing styles are drained somewhat slightly by the lowered intensity found there, and it really lowers this somewhat. Still, that’s not a big issue for it’s not as constant or consistent as the more enjoyable elements are.

With some rather stylish thrashing alongside some minor problematic issues, there’s still more than enough fun at play here for fans of the bands’ previous work or the less-discerning old-school thrash aficionados who will quite like the attack here while those looking for more fervent thrash will likely find it decent at best.

Does it sound good? Order it from here:
https://www.discogs.com/Hellias-Eight-Cardinal-Sins/release/9801689
Posted by slayrrr666 at 12:36 PM