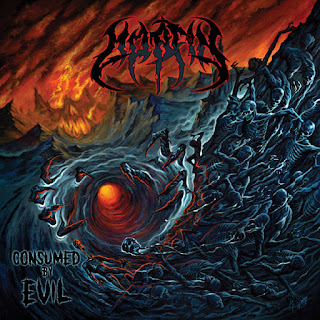 Continuing their march into the past, Southern California death metallers Morfin have taken the time and effort to continue to hone their style and have furthered their old-school sound into a tighter, more devastating force than the debut offering. With new guitarist Mike de la Q and drummer Mike Andrade joining the fold in the intervening years, the group offers their sophomore full-length May 5, 2017 on FDA Records.

Much like the debut, the band is clearly still indebted to the old-school sound of the genre and takes every opportunity to remind that’s where the dominant influences come from. That comes from the tight, sharp riff-work full of deep, churning rhythms and simple, mid-tempo patterns that form the dominant variety of attack here in the form of blistering thrash-style attacks that signal the early movements in the genre. Bringing that alongside the album’s penchant for melding the raging material with simpler, less violent mid-range efforts helps to force the connection to the old-school sound by bringing the slow, sprawling swamp-riddled patterns and fiery rhythms into the forefront. This is then carried along with their rather simple structures and one-note attack to create a rather effective old-school attack at times even though it does highlight the one singular flaw with the album’s overall approach. Keeping things so simple and one-note in terms of tactical riffing style and general sonic fervor means that the album tends to devolve into a generally suspenseless and rather predictable manner where if the opening few seconds promise a raging, fiery riff then the track follows suit, and if a rather mid-tempo rhythm is present then that’s the way the track as a whole is carried out. The short burst of the tracks really lets these get featured in this manner and it’s a rather distracting effort. It’s not as detrimental as expected, but still somewhat challenging.

While there’s plenty of enjoyable elements featured here and on the whole, it’s not completely terrible, the fact that it’s few flaws are there are enough to hold it back are just enough to lower this one strictly for the most devout old-school death metal fanatics or fans of the bands’ past works.


Does it sound good? Order it from here:
https://fda-records.bandcamp.com/album/consumed-by-evil
Posted by slayrrr666 at 12:36 PM