Lux Perpetua - The Curse of the Iron King 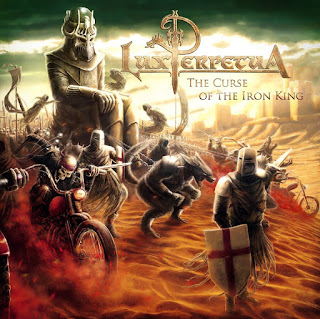 Originally formed in 2003, Polish power metallers Lux Perpetua began as Sentinel which lasted until 2009 before they dropped the name and were resurrected in their current moniker which took their sound to their current formation and standing. With longtime member Martinez leaving and being replaced by vocalist Artur Rosiński and new keyboardist Meg, the groups’ full-length debut was originally released February 28, 2017 on Underground Symphony.

Firing off straight from the old-school, the group is quite intent on letting their influences get pushed to the forefront that it’s quite apparent from the start. There’s a prominent showing of fiery neoclassical-inspired rhythms and bombastic paces that keep the majority of the tracks at full-throttle for the massive sound generated here. The inclusion of twinkling keyboards and blistering drum-work makes for an even greater sprinkling of power, and this creates the kind of bombastic take on the genre which gives this one the required speed and tone that falls right in line with the bombastic efforts in this style. When this drops off into the softer realms, this drops those elements in favor of a lethargic chug and a more overblown keyboard-drenched style that keeps the fiery speed-metal riffing in the background as the melodic tones become far more prominent which does take some of the sting out of the attack even with these still providing plenty of engaging work in these sections. There’s a slight tendency here to feel somewhat overlong as the second half does get a more enhanced epic vibe in the material here which does strike as a somewhat minor problematic issue, but for the most part, this one really doesn’t detract much from what’s expected here. Far more problematic, though, is the fact that the vocals here are somewhat off-putting in the genre being much too gravelly and gruff for this type of light and fluffy genre so those going in expecting an operatic performance might be somewhat surprised here. However, even combined these aren’t enough to knock this down that much.

Despite the slightly off vocals and a minor bloated second half, there’s far too much good produced here for a first-time effort that this one manages to come out of the gates swinging and lands often enough to be of great significance for those yearning for the early days of the power metal explosion and bright, bombastic power metal.

Does it sound good? Order it from here:
https://luxperpetuaband.bandcamp.com/album/the-curse-of-the-iron-king
Posted by slayrrr666 at 2:32 PM