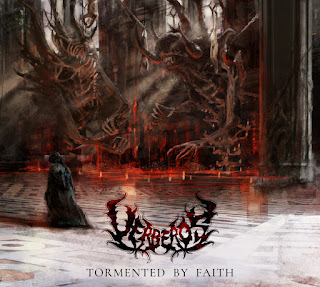 Artist: Uerberos
Release Title: Tormented by Faith
Year: 2017
Label: Self-Released/Independent
Genre: Old-School Death Metal
Tracklisting:
1. lntro
2. ...and Finally, I Will Come
3. Destroy the Enemy
4. Tormented by Faith
5. To Be Seen and Heard
6. Black Emissary
7. My Lord, My Father
8. No Redemption
9. Live and Die Like a Human
10. Respect for Death

Formed in late 2015, Polish death metallers Uerberos came together from the disbanding of a previous offering to go in a far different direction with the group offering forth a far more brutal and intense variation on the traditional Polish sound. Now finally able to hit the studio for the first time, the group prepares it’s self-released debut full-length February 10, 2017.

As is to be expected here, this one is pretty much right on with the expected norms found within the Polish death metal scene as a whole. The music here is fast, furious and driven by tight riff-work, chugging along at a frantic pace throughout here, giving this a truly enjoyable and engaging backbone upon which to add on plenty of other elements. The tight rhythms throughout here give this the kind of thrashing energy that’s reflected nicely amongst the choppy, chugging patterns elsewhere here and that leaves this with some solid full-throttle moments here. The biggest factor for this, though, is the bands’ ability to take their tight, frantic riff-work into a stellar grandiose atmosphere, droning along into a rather bombastic sense of epic qualities that are quite effective against the rest of the thrashing music throughout here which carries that thrashing atmosphere incredibly well alongside this bombastic. It’s when the band slips from the ferocity and aggression that it comes undone ever so slightly as the melodic accents are at the detriment of the main rhythms that are so fast and ferocious that there are some troubling times to be had here with the changeover. Still, this is the only flaw to be found here as this is quite the impressive debut.

Generally without a whole lot of flaws to be had here, this is a wholly rewarding experience mixing in the raging Polish death metal scene with hints of technicality and brutality and a few minor flaws does make this one a quality pick for any fan of Polish death metal or quality old-school death metal.


Does it sound good? Order it from here:
https://uerberos.bandcamp.com/
Posted by slayrrr666 at 1:23 PM