Daemoniac - Spawn of the Fallen 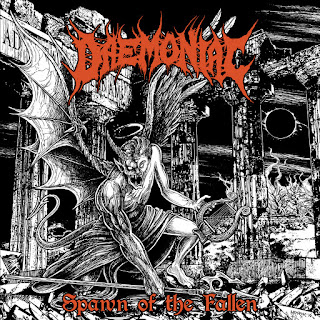 Formed just in 2013, Italian death metallers Daemoniac have taken immediate action to honor their chosen influences in the Swedish old-school death metal realm with a variety of impressive and rather obvious homages to that seminal group of bands. Taking their sound straight to the source of it at Sunlight Studios, the three-piece unleashes their full-length debut January 1, 2017 on Xtreem Music.

On the whole, there’s very little change or deviation throughout this one that strikes much of difference between this or any other group in the Swedish homage scene. This one goes for the same attack as so many employ, that grinding buzzsaw-style guitar attack and plenty of thrashy chugging beats which makes the majority of the overall focus here replete with that deep, churning groove so synonymous with this scene. It rarely lets up throughout here, ranging from the fast and frantic attacks to the slower, more melodic sprawling that comes complete with the more restrained tempos and enhanced melodic fireworks in the riffing. As the vast, overwhelming part of the album tends to remain steadfast in these elements, there’s really no surprises in store here in terms of presentation which is what ultimately lowers this one. It’s so simple-minded and straightforward in intending to deliver such rather familiar and played out rhythms here that have been done so often and with so many varied acts in the scene that regardless of how they play this material with such fervor and intensity it really just seems like the status quo for the genre. It’s fast, violent and intense but is like so many others out there that it feels like a real lost identity in here.

With this one being so overly familiar and not all that original, it loses a lot of its impact as the remainder of this one contains enough blistering material and ferocious rhythms that gets lost at times here which makes this one really only for the most undiscerning Swedeath aficionado or hardcore old-school death fanatic.

Does it sound good? Order it from here:
https://daemoniacofficial.bandcamp.com/album/spawn-of-the-fallen
Posted by slayrrr666 at 12:29 PM