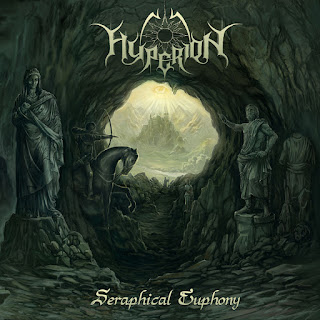 Formed in late 2007, the Swedish melodic black/death metal outfit utilizing Hyperion have always been quite adept at featuring their old-school black and metal influences carried through their ancestral country-mates that cultivated their sound in the early 90s. With the group rounded out to a sextet with the addition of third guitarist Joel Hagroth, this sophomore album was originally released February 6, 2016 on Black Lion Records.

Once the album gets going, it’s really easy to see where the band has taken its influences from as there’s a rather obvious attack surging throughout here. This one goes for a pronounced and distinctive element of striking tremolo-pitched riffing and deep, swirling chugging, giving this the atmospheric and blistering take founded in the early days of the genre where the sparkling melodic leads over the thumping patterns created a heavy and yet still highly melodic attack. Given that majority of the album utilizes these efforts to oftentimes epic stature here, it’s all nicely balanced out by the fine addition of more relaxed, charging mid-tempo paces which go for a streamlined, swirling tremolo attack and sterling keyboard work which carries this one along into the melodic realm rather than the faster, more frantic efforts which is quite appealing. This dueling approach gives it a fine mixture of both charging, fiery intensity as well as breath-taking melodic interjections featured alongside each other, and the end result is inherently dynamic and well-crafted material. This does result in several tracks where it really feels it’s length and the epic quality does run against it, though since it’s a rare occurrence this isn’t all too detrimental and doesn’t really hold this one back all that much.

Without a whole lot of really big, detrimental issues to be found here, the fact that this one comes out of the gate with such a strong, impressive attack makes this a worthwhile act to follow in the future and is heartily recommended for all fans of the old-school melodic black/death sound or melodic black metal in general.

Does it sound good? Order it from here:
https://hyperionblacklion.bandcamp.com/album/seraphical-euphony
Posted by slayrrr666 at 12:21 PM