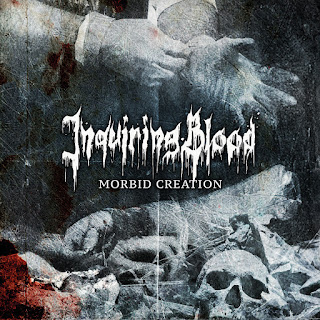 Offering their sound at it’s fullest, German death metallers Inquiring Blood have had their careers shaped mightily by their ravenous live assault that has brought their grooving brand of classic death metal inline with the scene giants of the past. With a six-year hiatus between releases, the quartet finally releases their sophomore full-length December 16, 2016 on new label Kernkraftritter Records.

Coming together with a furious assault, the band launches into their attack quite evidently as it’s immediately apparent they’ve not lost their touch in the half-decade silence. Filled with tight, churning groove-styled riff-work throughout here, the overall attack simply revels in simplistic mid-tempo rhythms that are straightforward and ravenous which creates a solid, cohesive sound to their attacks. When added together with a solid balance of melodic flurries and patterns, the album creates a rather reasonable atmosphere that comes off as a great fit to what’s being attempted here. Given that this leaves the material generally upbeat and lively, there’s a lot to really like about the style of attack this creates, although it does leave the album feeling quite one-note and simplistic for the vast majority of the time here. There’s very little deviation or dynamic qualities about the music within, regardless of the intensity or quality of the performances which makes for a rather troubling route here as this one tends to just go through the motions of its chosen style and not really offering anything to change it up and it can become highly monotonous as a result. That becomes much more prominent here as it goes along since this one really doesn't need to go for as long as it does here, as there's a few too many tracks for this kind of ultra-simplistic style doing the same thing to really make any sense for why it went that long. Still, this doesn’t really lower the album that much as it still gives this a lot to like overall.

While still somewhat troubled by its simplistic nature and overall attack, the fact that this one goes for quite a strong showcase of this rather one-note style does give this one enough to be able to overcome that enough to be a fine if unessential selection for death metal aficionados or fans of this simplistic style.


Does it sound good? Order it from here:
http://www.kernkraftritter-records.de/product_info.php?info=p142_inquiring-blood---morbid-creation.html
Posted by slayrrr666 at 1:32 PM