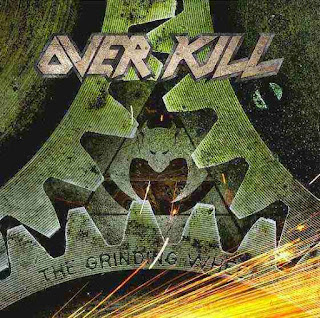 Remaining true to the old-school, New Jersey thrash legends Overkill have been at the helm of the scene since the early 80s without ever receiving the credit due for keeping the genre as big as it is as they’ve amassed a back-catalog that rivals anyone in the genre from start to finish. With a line-up firing at the top of their game, their celebrated nineteenth album was originally released February 10, 2017 on Nuclear Blast Records.

It should come as to no surprise what the band has been doing in their latest resurgence during the past decade, and for the most part that remains true of their latest release. An overwhelmingly vast amount of the material here comes off with a great sense reflection on their past employing their trademark swirling thrash riffing and pounding rhythms that once again displays their penchant for dynamic tempo shifts that makes the music far more interesting than most suspect. Elsewhere on the album, the band continues to explore their long-standing infusion of groove into their sound that keeps their straightforward sections as biting and intense as ever. Capable of carrying their swirling patterns and clanking rhythms into intense sections without relying on their raging speed-drenched paces that are a staple of their sound, it’s all quite familiar in the best way possible by carrying on a traditional feel of their own past rather than looking at anything else in the genre which makes the fiery, explosive material sound rich, dynamic and full of energy that thrashes and rages with the most explosive. Just to nitpick, the album doesn’t really feature the greatest production with the guitars sounding far too clean and lacking the bite that usually comes from their sound. However, this is again nitpicking as the album contains everyone necessary to be enjoyable.

A nearly-flawless release that has so much to really like about it, this might not be as important or influential as the bands’ past history might be but it is so good at what it does that it stands up as an upper-tier inclusion in their style and makes for another worthy piece to their collection or just metal fans in general.

Does it sound good? Order it from here:
http://shop.nuclearblast.com/en/products/sound/cd/cd-digi/overkill-the-grinding-wheel-digipak-.html
Posted by slayrrr666 at 12:18 PM