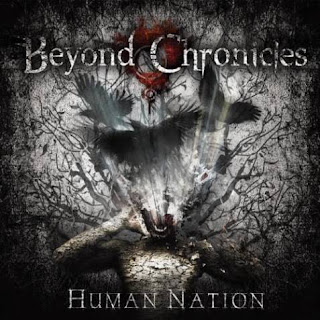 In existence since 2012, Paris-based melodic death metallers Beyond Chronicles have steadily risen to the point of allowing their influences to take place in bringing out the groups’ finest official release yet following their continuous stretch of live dates to hone their skills. Coming together in grand style, the first full-length album was released October 7, 2016 on Dooweet Records promotions.

Taking full advantage of their style, the group manages to exploit these elements together in fine fashion as they utilize their skills in rather decent offerings. Built around short, stuttering rhythms and a crunchy mid-tempo attack, there’s a generally solid attack featured throughout here that makes the generally one-dimensional material come to life. With the infusion of swirling melodic rhythms throughout the vast majority of the tracks as well as the inclusion of a stellar dynamic mixing together the hoarse shouts with the clean crooning, it all comes off with a fine light melodic touch that’s quite nicely in keeping with the general feel of the album. There’s little to be done, though, for how much of an impact the flaws have on this one as the material is quite light and one-dimensional sounding. It’s all based around the continued usage of a lightweight-sounding chugging series of mid-tempo riffs that keeps the energy level down into nearly achieving breakdowns in the middle of the tracks that really brings the whole quality of the second half of the album down. Likewise, the fact that this one really has quite a pronounced lack of variety where the songs blend together into so many similar set-ups which makes for a fine if much too familiar experience where the album really loses steam in second half as it becomes all too obvious that it has run through the playbook already and just offering up more of the same that highlights the fact that it’s much too long running-time-wise which highlights this factor much easier. Still, for a debut, it’s not entirely terrible.

While nowhere near an important release overall here, the fact that this is a debut and is to be expected that a learning curve si to be established for bands as they make their way in the scene is enough to levy this one somewhat into being really only for the most diehard and undiscriminating melodeath fan.

Does it sound good? Order it from here:
http://beyondchronicles.com/product/human-nation/
Posted by slayrrr666 at 11:29 AM