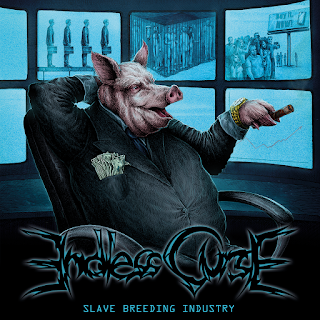 Formed back in 2009, German death metallers Endless Curse have come together to fulfill their mission statement of bringing intense death metal through a series of vicious beatdowns and tight performances utilizing all the extreme elements at their disposal. Following their first EP release, the group went on a four-year hiatus has finally allowed the band to bring out their self-released debut on October 28, 2016.

With a strong preference on utilizing the extremity throughout here, this one really manages to sweep through a wide array of influences to bring out that chosen sound. Fueled by a boiling, rumbling hardcore-influenced riffing style, the short, stuttering tempos are up-front and thoroughly intense throughout here which manages to work quite effectively at generating the pummeling sections required for a primal beatdown. Given that the material is incorporated against thrashy, vicious death metal rhythms and churning arrangements, the fact that there’s a wholly overwhelming and intense sound throughout here makes for quite a strong overall impact throughout here which comes off quite nicely here with the album’s thick, vibrant production that truly maximizes this one’s pummeling and brutal approach. The only downside to that approach is the unfortunate fact of bringing out way too many instances where the material is so similar to each other that the material becomes a general blur of vicious, intense riffing and drumming without distinguishing itself from anything else. There’s a big swath of the album that blends together into the same repetitious elements that come off rather close to each other sonically which is where this one really comes down despite the remainder of the album being quite enjoyable.

As a debut, there’s enough leeway here to hold up the great amount of positive aspects to this one as that comes off rather nicely here and makes this one quite the appealing effort for fans of this rattling, pummeling style of intense death metal or those that prefer the bands’ style of influences.

Does it sound good? Order it from here:
http://endlesscurse.bigcartel.com/product/slave-breeding-industry
Posted by slayrrr666 at 11:46 AM