Victorius - Heart of the Phoenix 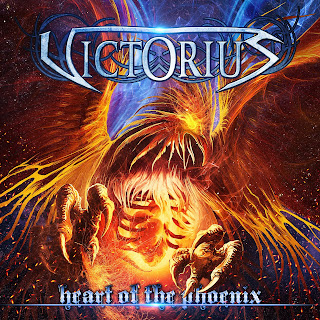 Artist: Victorius
Release Title: Heart of the Phoenix
Year: 2017
Label: Massacre Records
Genre: Power Metal
Tracklisting:
1. Shadow Warriors
2. Hero
3. End of the Rainbow
4. Die by My Sword
5. Sons of Orion
6. Heart of the Phoenix
7. Empire of the Dragonking
8. Hammer of Justice
9. Beyond the Iron Sky
10. Virus
11. A Million Lightyears

Following their current trend, German power metallers Victorius have been continuing to hone their skills in the live format as the bands’ recent hiatus has allowed them to produce a tighter, more vibrant sound through all the enhanced activity they went through. With the live activity resulting in a three-year gap between releases, the groups’ fourth full-length was originally released January 13, 2017 on Massacre Records.

Almost immediately, it’s apparent that the bands’ hard work has paid off in dividends as there’s an immense blast of forceful and power-packed power metal. Taking the same general approach as before which takes the form of sterling rhythms, triumphant vocals and sparkling melodies interwoven into a tight, charging speed-metal core, forming the essence of plenty of spectacular power metal bands throughout its history. As well, these tracks that gallop along at rather nice mid-tempo speeds here rather than going overboard with the bombastic overkill balance out the more chugging-centered patterns that hold off the driving rhythms in favor of harmony-laden keyboard and more cheese-driven speedsters that tend to be more emblematic of the genre’s more current output of layering plenty of the keyboards and vocals over the driving drumming and explosive guitar melodies that adds worlds of harmonious rhythms to the tracks throughout here by adding the triumphant nature to a strong baseline of work. The strong melodic interjections work quite nicely here at forming a blistering sense of power running through a toughened exterior, though it does highlight the fact that the band does dip into those shallower depths somewhat frequently and brings about a rather formulaic approach which doesn’t need to be there with the album working nicely with the stronger rhythms generating quite a lot to like here and the lighter approach does undo a lot of that good will. It’s not completely extinguished but does bring it down somewhat.

While it’s still a somewhat new and novel experience for the group, there’s plenty to like here with the bands’ rather impressive attack getting utilized to it’s fullest extent which has the great effect of making this one a wholly worthwhile release for fans of triumphant, highly melodic power metal.

Does it sound good? Order it from here:
http://www.victoriusmetal.net/products/heart-of-the-phoenix.html
Posted by slayrrr666 at 11:45 AM