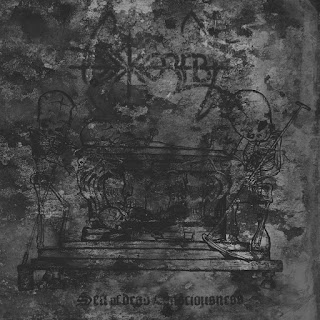 Still fine-tuning their sound, German technical death metallers Inexorable have continued to explore the fine line between the churning complex patterns and eerie, dissonant chords that have been at the forefront of their sound from the beginning. Taking their brand to the darkest extremes possible, the bands’ third EP was released March 15, 2015 on Unholy Prophecies with a reissue January 31, 2017 on Godz ov War Productions.

As was the case with the bands’ other works, the emphasis here is decidedly akin to their previous works with plenty of the same overall feel throughout this one. The main element present here is the preponderance of jangled, discordant riff-work that’s a strange mixture of angled, buzzing and generally avant-garde rhythms in complex technical passages which are so prominent that it’s quite a shock to see a vast majority of the album caked in the swampy, filth-riddled passages that are featured here. The bands’ rather epic nature of blending these elements into tight, swirling and extended passages that work quite well throughout here as the vast majority of the work creates that clattering feel throughout here which tends to bury their technical prowess quite adeptly, and it becomes even more apparent with the multitude of cover tracks at the back end of this one. That really is the biggest problem here, in that the cover tracks are such faithful recreations in such distinctive genres and styles that this one really seems split into two distinct sections and styles here, with the first half being jangled and chaotic death metal while the second half is full of straightforward and pummeling black metal without much variation, and there’s a clear difference between the two such that it leaves this one feeling quite disorganized. Still, it’s not all that detrimental as the enjoyable tracks do have a great feel and vibe from them which evens it out a little more.

Despite not really offering up much of a point with the inclusion of the cover tracks at the back end due to their rather disorganized and jarring feel from the original material, the fact that there’s still so much to like here really makes for quite a strong and worthwhile release for fans of challenging material or their past works.


Does it sound good? Order the reissue here:
https://godzovwarproductions.bandcamp.com/album/inexorable-sea-of-dead-consciousness
Posted by slayrrr666 at 12:57 PM