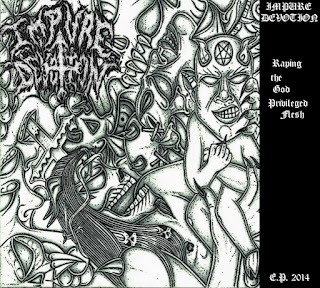 Storming out of the underground, Texas-based punk/black’n’rollers Impure Devotion have come together to bring out the exceptionally depraved and demented sounds they crave that gets explored quite adamantly throughout this piece. Representing their first professional release, the bands’ debut EP was originally released December 11, 2014.

Featuring a rather raw and garbled approach, the band certainly steps out in the spotlight with a fierce and fiery first assault that’s quite decent at its overall style. The main genesis to be found here is the filthy, thrashing riff-work that carries out the same dirty, high-energy style and content generally featured in a raucous, simplistic manner that really exposes their punk leanings due to the overall simple-minded nature of the material. This rattling, ferocious material gets plenty of work here over the pounding drumming and fierce vocal work that contains a rather high amount of engaging rhythms full of explosive thrash and punk leanings, and when it’s then taken a step further with the low-fi, ultra-raw and near-garage-band quality production here it makes this all the more frantic and intense. Still, that production is going to be a major hurdle to overcome as the vast majority of the album blends into an indecipherable blur of thrashing guitar noise and thudding drumming which is pretty much what the entire album as a whole consists of. There’s not a whole lot of differences in the tracks which gets emphasized by the simple-minded nature of what’s on offer, and basically that all comes down to lower this one somewhat. Even with these flaws, though, it’s still got quite a lot to like at times.

Despite a few minor missteps that hold it back, the main part of this one offers up enough to like here in terms of raucous energy and intensity that manages to generate enough interest for those that can appreciate this kind of style while those that look for more professional output in the music should heed caution.


Does it sound good? Order it from here:
https://impuredevotion.bandcamp.com/releases
Posted by slayrrr666 at 1:26 PM