Olÿphant - Expedition to the Barrier Peaks 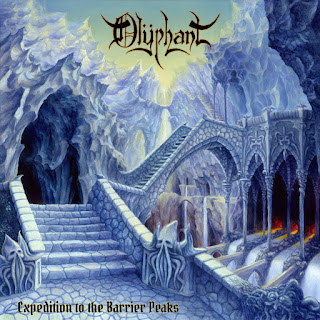 Formed in 2009, Massachusetts metallers Olÿphant were originally conceived as a classic metal cover band before quickly moving on to writing original music that brings a classic metal with doom and stoner influences to prog and thrash elements alongside. With the group rounded out by second-guitarist Brett Hess prior to the release, the group prepares to self-release it’s debut full-length October 7, 2016.

This has a quite prominent and wholly enjoyable burst of old-school style heavy metal which features a grand assortment of stylistic elements to like about it. Basically dripping with sprawling, mid-tempo dirges, the album’s main focus becomes quite clear early on with the ability to effortlessly shift from these wide-ranging elements as there’s a strong showing of spindly, galloping heavy metal, swirling stoner riff-work and plodding, oppressive doom rhythms that all come together here. This wide-ranging set of influences creates a wide-ranging sense of free-flowing and unpredictable work, never really journeying through the expected realms of the genres in order to continually warp themselves into a finely-tuned effort that’s quite enjoyable when it drops these vastly-varying elements into the journey without warning. At times, though, that does the album a slight disservice as this rarely manages to feel like it shifts all that cohesively, being essentially a wide-ranging hodgepodge of influential elements coming together to create a seemingly jarring and discordant array of tracks without a singular connecting vibe between any of it. That can make for a draining experience rather than what’s expected here with this one being so disjointed in approach that it can take away the surprises in store when it drops in these elements, and is an issue to contend with as the band carries on. Since this is a debut, it does get a slight pass in that regard, but it’s a noticeable issue.

Despite not really containing too many detrimental issues that sprung up throughout this one, the fact that not only was this a debut offering but had a lot to like anyway was more than enough to overcome that in order to be a solid-if-overall unremarkable addition to any fan of classic old-school metal.

Does it sound good? Order it from here:
https://olyphant.bandcamp.com/album/expedition-to-the-barrier-peaks
Posted by slayrrr666 at 11:39 AM