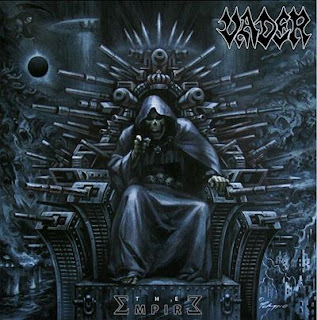 Still leading the genre to the fullest, Polish death/thrash legends Vader has been leading their genre’s charge for the better part of their near forty-year existence by churning out some of the most consistent and explosively enjoyable work around. Never one to take a rest following a slew of releases, compilations and even an EP earlier in the year, the groups’ tenth true full-length of original music was released November 4, 2016 on Nuclear Blast.

From the onset of their career the band has delved between two distinct styles in their music, and for the most part what’s featured here is the less-prominent aspect of their sound. The vast majority of the tracks here are all about the tight, churning thrash style rhythms of their sound, flying through furious non-stop riff-work and utterly pummeling energy that goes for the intensity and anger side of their sound rather than opt for the sprawling mid-tempo gallops. Rather, the music here is tight, short and to-the-point in it’s charging intensity, relying on the groups’ penchant for twisting through varying rhythms for its variety here that gives this a mostly thrash-based assault than most other offerings in their history. As this ends up being the dominant factor for the music here, it leaves a profound display of aggression and energy here by going through these dynamic paces and really drowns out the epic aspects of their sound here. These efforts are placed more on the sidelines of the album in favor of the tight, vicious thrashing on display which is where this one really suffers slightly with the slower, sprawling efforts taken out for these shorter bursts of thrash that it makes the album feel much too brief as the running time is noticeable with the short, blistering intensity featured here being just too obvious with the vast majority of the album being under three minutes so when it goes beyond it’s all the more obvious. Still, that alone is all that’s wrong here which isn’t really all that detrimental at all.

With the only real problem here being quite a laughable flaw that’s really the epitome of grasping at straws, that factor should be expected from a band this consistent and enjoyable as this vicious, furious slab of thrashing-tinged death metal will go down a storm with fans of their past work, death/thrash in general or those curious about the bands’ longevity and need a fine entry point into their catalog.

Does it sound good? Order it from here:
http://shop.nuclearblast.com/en/products/sound/cd/cd/vader-the-empire.html
Posted by slayrrr666 at 1:27 PM