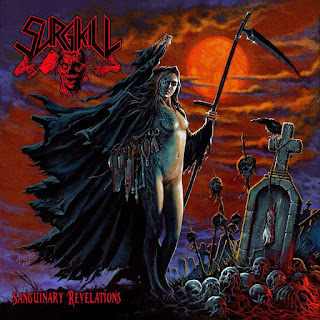 From the outset, this is quite an appealing and damaging effort that really handles an explosively chaotic take on old-school death metal that comes through quite clearly here. Managing to mix together the rather fine, explosive riff-work which is filled with simplistic, sprawling chug patterns that really stay in mind quite easily despite the inherent simplicity with a rather fiery charging pace full of ferocious riffing, more lively patterns and an increase in variations throughout, this becomes quite a fierce display that’s welcoming and wholly immersive. With each variation taking on their own enjoyable elements, with the more simplistic patterns keeping the interest with wholly intriguing patterns and solid arrangements while the faster sections adding a chaotic slant here with the advent of primitive-styled sloppy death/thrash arrangements that counterbalance the refined and controlled chugging, creating a uniformed feel throughout. While that in itself gives this one plenty to like just based on the inherently impressive old-school attack, the bands’ true ferocity is demonstrated on the vocal front with the group employing nearly everyone to supply screams, grunts and growls. That results in four of the personnel supplying the screaming here and the resulting audio assault is nothing short of nightmarish, running the gamut of wet gurgling, howling screams and high-pitched female growls permeating this one. Worse off is the fact that they’re layered over the tracks resulting in several of the vocalists growling in unison and leaving a rather impressive display of truly squeamish qualities throughout here, merging these sounds into a truly effective whole with the ravaging music here.

Though it may come off simplistic for some, it’s about the only thing really wrong with this one as otherwise there’s such a truly explosive, wholly impressive offering of savage, striking old-school death metal on display here that this one truly becomes a recommended listen to fanatics of the genre, revivalist-aficionados or fans of the creative personnel within.


Does it sound good? Order it from here:
http://www.surgikill.bigcartel.com/
Posted by slayrrr666 at 10:12 AM