Mortal Peril - The Legacy of War 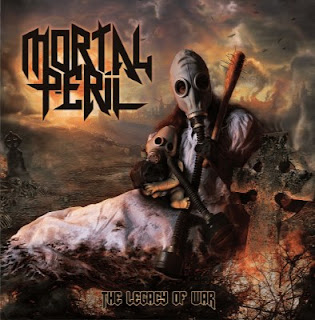 Coming right on the heels of their last release, German thrashers Mortal Peril have quickly crafted a new album released slightly over a year from their debut effort and carries the same high-quality retro-fueled thrash vibe as what they delivered previously. Being the last recorded output of guitarist Bjornsson Greene with the band operating as a trio now, the groups’ second full-length was originally self-released May 21, 2016.

It becomes immediately evident from the onset that the band is clearly indebted to the old-school thrash scene as there’s plenty of elements at play from that scene. The album basically works through the same generally one-note approach of tight, crunchy thrash patterns galloping along at a steady mid-tempo charge while filtering in swirling melodic leads to counterbalance those rhythms, and for the most part that constitutes the majority of the album. It does drop the straightforward crunch for a series of slower, sprawling chugging riffs which becomes the main sense of stylistic variation within the tracks which makes this one quite simplistic and straightforward as without any kind of technical showcase here, that’s really all that deviates the tracks from each other. Although this is aided into the old-school vibe quite nicely by the overall thick, fuzzy production tone which is much more in line with the guitar tone and feel that was present in those days, it highlights the first minor set-back in the album coming together to the point of being pretty difficult to determine tracks apart from each other. That production does seem to give this a more uniformed appearance to the tracks and causes this to lose a lot of individuality in here, making this appear as yet another revivalist thrash metal band without doing much else with the music beyond displaying a nice sense of fire for their rhythms and tempos. It is a minor deficit in this one, and does harm it somewhat.

Although it does have some solid work to be found at times here, the fact that this one does suffer from the same problematic issues so commonly found in the ever-expanding and crowded retro-thrash scene that they’re apart of makes this one really only recommended to the most devout enthusiasts of that genre.

Does it sound good? Order it from here:
https://www.facebook.com/MortalPeril
Posted by slayrrr666 at 1:33 PM