Decayed - The Burning of Heaven 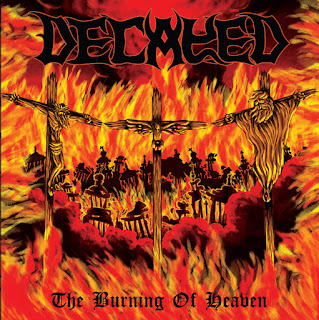 One of the country’s first genre practitioners, Portuguese black metallers Decayed have brought a rather charging and damaging attack that has been their main basis throughout their twenty-five-plus years of existence that began nearly at the birth of the genre itself. With the power-trio having honed their material into a coherent whole, the groups’ twelfth full-length album comes nearly a calendar year after their last album on July 31, 2016 on Hellprod Records.

Given their history and durability in the genre, there’s quite a prominent and heavy influence here with the bands’ old-school influence firmly on display. This one goes for a mostly simplistic, buzzing quality to the rhythms that features utterly straightforward and truly one-note tremolo-styled riffing firmly entrenched in the crossover area between the first and second-wave black metal movements, containing that fiery, frost-riddled atmosphere while containing the rocking energies and simplistic rhythms that manage to merge these two styles together quite well, and given the genesis of their creation it’s quite appropriate to mix together these styles. While these make up the majority of the album overall, it’s given a nice boost of variety here with the inclusion of vicious, punk-laced efforts that drop all pretenses of mixing together these styles and just go for raging, dirty-thrash styled rhythms and blistering speed. There’s little pretense about these, they’re just straightforward and utterly devastating as a result by focusing primarily on the energy generated by these patterns, and on the whole, there’s not a whole lot to dislike about this. The main issue this brings up here is the fact that the jarring approach that creates here is a rather obvious and wholesale one going through so many wild and varying tones here with the simplistic approach clashing with the raging rhythms as if this were two separate works mashed together for a split album. Likewise, there’s little need for the album to go from twisting, turning ten-minute epics to minute-long interludes which aren’t part of a concept album and leaves the release even more obvious about its discordant feel. However, these are really all it has going against it.

While there’s not a great deal to dislike here, this one still comes off with a somewhat scattered feel and tone that clashes against each other part here that it really seems to offer itself mainly for the bands’ fans or to fans of the more raw, first-wave style of black metal as aficionados of more modern black metal should heed caution.

Does it sound good? Order it from here:
https://decayed666.bandcamp.com/album/the-burning-of-heaven
Posted by slayrrr666 at 12:40 PM