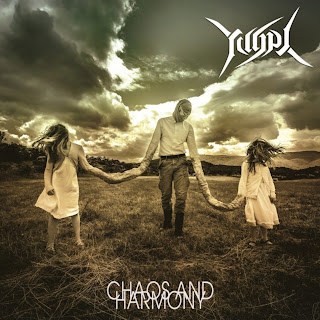 Coming together in 2009, French thrash/groove metallers Yugal spent several years honing their skilled mix between death metal, thrash and hardcore twisted with electric and traditional Middle-Eastern acoustic sounds over several years before finding their current voice. Furthering the lyrical connection between the duality of the universe, the bands’ debut album was originally self-released October 28, 2016.

Once this one gets going, it becomes quite a lively and violent mixture that brings about the bands’ rather strong stylistic choices at the forefront. There’s a strong element of swirling, mid-tempo thrash executed nicely here into a straightforward, simplistic manner that employs the chugging groove rhythms in conjunction with the thrash-based patterns to fully explore the bands’ chosen set-up quite well. Given that these are the more lengthy, involved tracks they give this one the kind of set-up which makes for quite a violent, hard-hitting attack here that goes quite nicely with the albums’ shorter, more traditional groove-minded efforts which instead drop a lot of the thrash elements for the inclusion of violent hardcore-styled beatings which are wrapped together with the groove-based chugging riffing for a nice dynamic affair. While these elements here are just so overly familiar and blandly recreated that not a whole lot of interest is really derived from this attack, the fact that the band manages to enhance these with the infusion of Middle Eastern-styled swirling acoustic rhythms makes a big difference in the overall attack here which gives this one some rather intriguing elements at times by offering a distinct and rather intriguing melodic flair alongside the repetitive-yet-still-competent riffing elsewhere throughout here, and it helps to hold this one up somewhat.

Given that the bands’ attack is derived from quite a few bands which makes for a violent if routine offering overall, the fact that enough interesting and intriguing elements are present here makes for enough to make this one intriguing enough for fans of the more violent, intense thrash-based groups to give this one a chance.


Does it sound good? Order it from here:
https://www.amazon.com/Chaos-Harmony-Yugal/dp/B01NAEFCAV
Posted by slayrrr666 at 11:16 AM