Metal Witch - Tales from the Underground 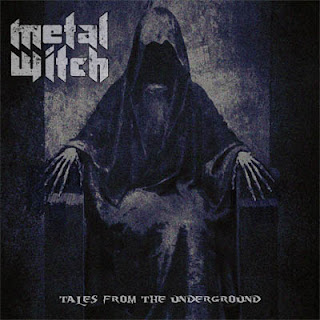 One of the country’s original pioneers, German metallers Metal Witch continue to enjoy their newfound exposure after reuniting as the long-time proponents of pure Teutonic heavy metal continue to lead the way with their enjoyable style. As the eight-year gap has seen original member Dietmar Hanke quit the band and new guitarist Lorenz Hoppe join up, the group releases its sophomore album October 7, 2016 on Iron Shield Records.

Almost immediately, it’s clear that the band is adept at displaying fiery, raucous old-school metal style with a traditional flair for the rhythms and melodies. This one is mostly about energetic riffing full of crunchy, NWOBHM-influenced melodies which run the gamut of tempos from wild, raucous up-tempo patterns to a more controlled mid-tempo style that opts for a sing-a-long style series of works which are still incredibly fun throughout here. Featuring this stylistic type of attack here works nicely in generating a varied type of approach which is quite an impressive throwback to the traditional sounds of the genre yet still opts for a modern vitality that gives this the kind of overall appeal needed for such an otherwise one-note performance here. While on the surface it’s a nicely balanced and enjoyable enough with this type of ferocious blast of an attack, there’s little else about this one that really makes it stick out here being based on overly familiar tropes of the type of ferocious one-note performances here or the simplistic anthemic track that slows down the tempos into a mid-range charge. Though that might be enjoyable for some out there there’s little else on offer here for those that don’t like that particular style, even with the rather impressive professionalism displayed on the tracks.

Though there’s a slight issue of identity crisis here which comes from this one note really doing much else beyond its core approach of admittedly enjoyable and competently played tracks, that’s not nearly enough to hold back those enjoyable elements for fans of traditional German-flavored heavy metal or classic metal in general.

Does it sound good? Order it from here:
https://musicbuymail.com/en/shop/cd/metal-witch-tales-from-the-underground-cd
Posted by slayrrr666 at 1:07 PM