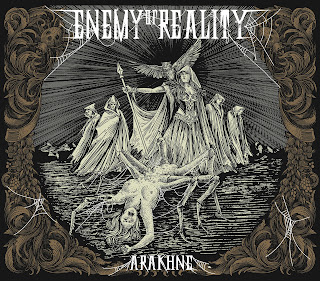 After the success of their previous works, Greek symphonic metallers Enemy of Reality have taken the style and musings of their Greek heritage to present yet another concept album about the titular spider’s creation and carries on from what occurred in the debut. With keyboardist Marianthie being replaced by Leonidas, the groups’ second full-length effort was originally released October 23, 2016 on F.Y.B. Records.

Once again fueled by the bands’ leanings, the main focus here is once again dwelling mainly in bombastic and grandiose rhythms and melodies as befits their symphonic leanings. Loaded with swirling operatic rhythms at the forefront of the music here with the main use of cinematic keyboards offering the dramatic and wholly soaring material present here which cuts through the album as a whole nicely, and fits alongside the remaining parts of the album. Featuring plenty of progressively-tinged Gothic riff-work, dripping with atmospheric touches and a rather strong beefy tone it creates quite an impactful connection here which makes for a much nicer and cohesive whole here that’s given quite a wide berth over the album with the remaining sections going for a more plodding operatic style that keeps this one much more inline with the simplistic side of the Gothic spectrum. Combined into a cohesive whole there’s quite a lot to really like here as this one gets quite a complete sound together, though it does stand as a bit out-of-place at times when it goes for the raspy male shrieks here as the vast majority of the album is quite competent with the dual vocalists together while those other parts just stick out quite badly. It’s not nearly enough to ruin the experience but it’s distracting at times.

Despite a few minor elements where it’s not nearly as impressive as it really could’ve been, for the most part, this here is a highly enjoyable and impressive slice of Gothic-infused symphonic metal that really comes off quite nicely here for hardcore fans of this style or those looking for impressive female-fronted metal acts.


Does it sound good? Order it from here:
http://enemyofrealityofficial.bigcartel.com/product/arakhne-album
Posted by slayrrr666 at 11:10 AM