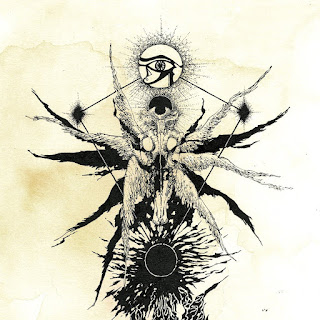 Following their previous releases, Australian black/death metallers Denouncement Pyre has steadily risen throughout the scene as the group’s propensity for added intensity and aggression makes for quite a dynamic presence throughout the album. Taking a three-year break from their last album, the power-trio releases their third full-length effort July 22, 2016 on Hell’s Headbangers Records.

Utilizing a rather familiar formula, the bands’ past works are brought to full-bear here with plenty of overly prominent aspects of their sound coming to the forefront here. Taking a very impactful and pummeling black metal style with the swirling tremolo riffing, darkened crimson-blasted tones and that dynamic frosty aesthetic to the rhythms and melodies while merging it all with the tight, churning riff-patterns and creating a wholly appealing overview of that appropriate genre mixture. As well, there’s the efforts where it takes on those churning patterns and meshes them with the sprawling tremolo riffing to create a rather controlled burst of melodic intermittent rhythms that balance out the furious, raging work elsewhere throughout the album, ebbing and flowing together in fine fashion in a wholly appealing running order which is quite appealing and well-done throughout this by never keeping a lagging pace for too long or offering too many similarly-themed efforts around each other. It’s impressive that they’ve managed to accomplish this facet this early in their career, and really makes this one all that much more fun here with the varied approach on display. There are occasions where it dips down slightly too much for comfort and drags itself along somewhat, but it’s really the main issue to be had here as this is another fun and enjoyable blast of molten black/death metal.

Managing to bring out yet another stellar and impressive outing of black/death metal that features plenty of enjoyable elements while not really featuring too many problematic or even detrimental areas, this is a great inclusion in a rapidly growing part of a catalog that should readily appeal to all black/death aficionados or to quality extreme metal in general.

Does it sound good? Order it from here:
http://denouncementpyre.bandcamp.com/album/black-sun-unbound
Posted by slayrrr666 at 11:30 AM