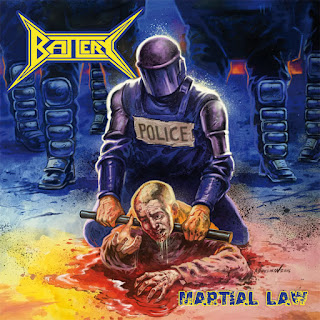 Taking their influences even further, the Danish thrashers under the banner Battery have continued to bring out the bands’ absolute dedication to the old-school Bay-Area style of thrash which has been a part of the group’s history from the start. Being the last recorded output of long-time drummer Andreas Joen before leaving the band, the sophomore release was originally released November 25, 2016 on Punishment 18 Records.

As was the case for the bands’ career, the vast majority of this one concerns the absolutely frenetic and enjoyable bursts of old-school flavored thrash metal. Like many of their compatriots, there’s a strong sense of the rhythms taking plenty of influence from the Bay-Area style here with the fiery, crunchy riff-work and that ever-familiar rumbling series of bass-lines that clang and rattle along with the music quite nicely. With these being the more vibrant and intense tracks, they capture that sense of frantic, engaging thrash-scene effectively with the tight, ripping rhythms being given that old-school sheen due to the crunchy riff-work while also allowing for the group to descend into more laid-back and mid-tempo gallops in order to offer some rather nice diversity which rounds this out nicely. That also does highlight the main issue in that the album is incredibly one-note and one-sided in its appreciation and devotion to the scene that it never once comes off all that original in terms of appearance and generally feel. This one manages to play that same general tactical approach in the old-school riffing and blistering leads which really makes for a rather familiar time that really overwhelms and lowers it somewhat. As well, the fact that it’s quite short due to the tight, frantic rhythms does lower this one somewhat as the intensity levels do bring it back down from what it could’ve been as they’re over before it really matters. However, it’s not nearly as big a detriment as the overall familiar attack.

Although it does have a rather familiar approach and attack that does get hindered here somewhat, the overall infectious attitude and enthusiasm that’s featured here is quite able to overcome much of that in order to make for a solid and worthwhile if non-essential choice for revivalist thrash fanatics or less-discerning thrash fans.


Does it sound good? Order it from here:
https://batterythrash.bandcamp.com/album/martial-law
Posted by slayrrr666 at 1:38 PM