Temple of Demigod - The Great Old Ones 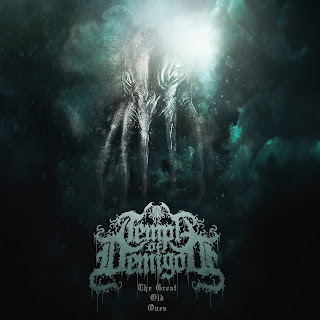 Echoing the lyrical themes explicitly, the main crux of the bands’ style is found in the sweeping mixture of ornate blackened death metal spiced up with symphonic elements. The material is mostly kept charging along at a crunchy mid-tempo augmented with thick, beefy riffing and tight drumming that carries a stellar atmospheric tone throughout here, letting the main focus shift nicely between the black and death metal realms. That heavy crunch to the riffing and the more textured focus on varied tempo changes as the album continues through its paces which give this a decidedly more prominent death metal aspect to the rhythms for the most part which is balanced out nicely by the fiery melodic accents and bombastic keyboard-laced symphonics that come into play here. This makes for a wholly more intriguing dynamic when it starts in on the more advanced integrations between the raging over-the-top symphonics and the twisting, turning riff-work which adds a larger degree of theatrics to the package that gives this the kind of tempo shifts that give this an added benefit to be had here with the more heavy, crunchy patterns added to the bombastic nature here. These here really help to make for a rather impressive if seemingly overly-familiar time here. The album plays way too close and familiar to plenty of other bands in this style which really has very little originality in their rhythms and arrangements which come across often in the album moves between so many easily-identifiable sources. Still, the enthusiasm of the project is enough to overcome that and holds this up for the most part.

Despite featuring some rather familiar and overly identifiable sources in terms of noticing influences, the debut nature and high-energy quality of the material rises this one up more than enough to make a worthy choice for those that enjoy the members’ other works or fans of the symphonic genre.

Does it sound good? Order it from here:
https://templeofdemigodus.bandcamp.com/album/the-great-old-ones
Posted by slayrrr666 at 1:25 PM