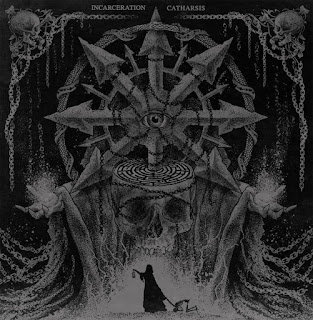 Formed in early 2012, Brazilian death metallers Incarceration have quickly built a reputation as one of the fastest, most extreme acts in the country which has continued as the group is now relocated to Germany. Following up the promise showed by their early works, the group finally prepares its full-length debut released October 28th. 2016 on F.D.A. Rekotz.

From the start here, it’s quite obvious about not only the bands’ influences and intentions but also the type of material to be expected throughout here. There’s a prominent attitude throughout here of tight, evocative churning riffing and controlled rhythms that demonstrate plenty of furious blasts spiced into the proceedings to make for a more dynamic affair as this one manages to whip up the energy into frantic driving tracks. These are nicely augmented by the tight riff-work and carries the blistering, intense rhythms as well as the more traditional sprawling, mid-tempo efforts along into a cohesive whole. This varied approach of controlled, restrained rhythms alongside the reckless, chaotic energy derived here gives this one so much to really like as a whole that it really holds up quite well alongside some rather detrimental flaws. The biggest issue here is the rather challenging vocals which are more in the hoarse screaming variety than any kind of true death growl which makes for quite a hard listen here and takes some getting used to. Likewise, the fact that the album is filled with such brief and mostly useless minute-long interludes which don’t make any sense to find their use here as they just eat up the time and really require the near eight-minute finale to bump this one up to a respectable length. While these efforts can be somewhat problematic for this one, some of it can be excused for being a debut but it’s still not enough to lift it up much more than that.

With some minor problems that are somewhat forgivable due to its debut status but more being pretty detrimental overall, there’s a mixed bag throughout here that it does have some appeal for some who enjoy that kind of ravenous, ferocious old-school death metal while those that can’t forgive the flaws should heed caution.