Eternal Champion - The Armor of Ire 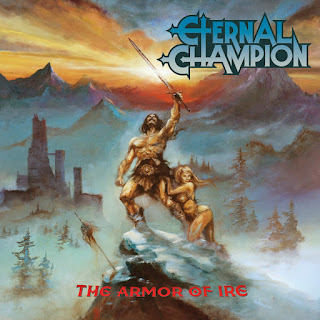 Formed just in 2012, Texas-based epic heavy metallers Eternal Champion quickly took on the tone and feel of the classic heavy metal sound from the 80s which helps to tie in their connection to Michael Moorcock's high fantasy series of the same name. With the album being the first recorded output of third guitarist Nujon Powers, the group finally prepares its debut full-length September 27, 2016 on No Remorse Records.

There’s not a whole lot about this one as immediately from the start, the band is clearly well-suited for their brand of old-school worshipping of traditionally-minded epic heavy metal. There’s plenty of beefy, sturdy trad-influenced riff-work at play here with the swirling melodic rhythms that gallop along at quite a steady pace here with the album’s preference for the bouncy mid-tempo race. This has the effective quality of leaving it feeling warm and quite luscious which is quite a usual ploy in this genre that manages to effectively evoke the melodic aesthetics from that style as it’s so familiar for the most part that there’s little doubt about its influences being derived wholeheartedly along the way. That leads into the main feature problem about this one as the wholly simplistic manner of the rhythms that it makes for way too close a tie-in to the old-school scene without really giving it an identity of its own. This comes off with way too much of a close-minded feel of the 80s which is so based on this style that there’s not a whole lot of room for this to go, and while it may have quite an effective touch here this does become an issue, though this one has a bit of a free pass being a debut.

Being quite a simplistic and rather one-note style of old-school attack does get this one into trouble at times, but there’s little denying the energy and enthusiasm that’s present in here which does quite a lot to overcome these flaws and makes for quite a worthwhile effort for those that aren’t hung up on these issues who are aficionados of this epic-tinged traditional metal.


Does it sound good? Order it from here:
https://eternalchampion.bandcamp.com/album/the-armor-of-ire
Posted by slayrrr666 at 12:56 PM