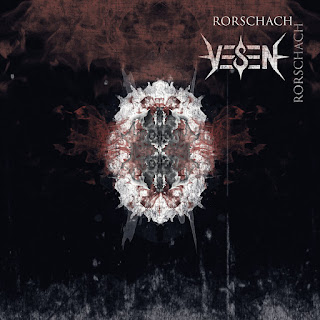 Finally returning to active duty, Norwegian black/thrashers Vesen have brought forth a concept album about the deteriorating mental state of an individual and how they deal with that told with the traditional sense of style found in their previous work. As the four-year break has brought along their same progressive edge to the forefront, the groups’ fourth full-length was released December 16, 2016 on Soulseller Records.

As what was so prominently a part of the bands’ past catalog, there’s a loud, raucous attack featured throughout here that makes for a generally explosive effort. Fueled by furious, swirling thrash rhythms and a generally full-throttle approach, the vast majority of the release carries this high-energy surge through the material aided nicely by the dark, filthy production style that adds more life to the proceedings. Unleashing the thrashing riff-work to delve into a raucous charge with the high-energy, fire-spitting rhythms that are nicely topped off by the darker patterns featuring plenty of the swirling black metal patterns that are introduced here to give this one quite a prominent darker facet to the music. Balancing it out quite nicely are efforts which drop the high-energy thrashing in favor of the slow, sprawling elements that extend this one out far longer into epics that counteract the tight, vicious thrashing elsewhere here, which is a nice feature though it does seem somewhat out-of-place here with the slow, ponderous rhythms being quite jarring against the more vicious, intense stuff throughout here. It does get a little slack here being that this is a concept album requiring those be placed here to carry the storyline out, but it’s still somewhat of an issue.

As there’s a lot to like here with the bands’ vicious and intense side rather than the more epic, sprawling material which holds it back, those few minor problems are just enough to knock this one back and makes this one really for the most devout and undiscerning fan of blackened thrash metal.

Does it sound good? Order it from here:
http://soulsellerrecords.aisamerch.com/item/42826
Posted by slayrrr666 at 12:15 PM